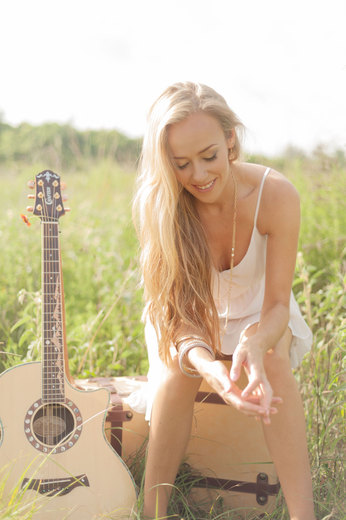 A small town girl born in Pincher Creek, Alberta and raised in Spokane, Washington, April Start moved to NYC at the tender age of 18 to pursue a promising music career.  She immediately immersed herself in writing and recording what would be her debut record, Changes, self-released in 2006.  Several songs from that CD were featured in hit Disney movies, such as Eddies Million Dollar Cook-Off and Zenon Z3, TLC’s Makeover Train, and the popular television show Cheerleader Nation. Her live performances have taken her to Pensacola, Florida (to open for the legendary Little Feat), across the states for NACA showcases, and to many top stages in NY and NJ.

As the most downloaded artist on the UK based music website Amazing Tunes, April was whisked to London for a private BBC showcase in June 2007.  The performance was deemed an outstanding triumph. April’s BBC performance was written up in London’s Metro Weekly, which boasts a readership of over 3 million.

Following a performance in 2009 at the ASCAP sponsored NJ Songwriters in the Round showcase, Start teamed up and collaborated with 901 Music on several songs, one being the positive, pop, teen-anthem, This is Me, which would later be licensed for use as the opening song for a Hollywood theater production.

In 2010, April decided to take a break from the music industry to pursue a lifelong dream of hers and go back to University to achieve a Bachelor in Science of Nursing Degree from Pennsylvania State University. Once Start finished school in 2014, she quickly submerged herself in music again, writing all the songs of her upcoming album due to be released in the fall of 2015, in just a few short weeks. Start says, “My greatest hope for my upcoming record is that people can relate to the songs. To me there is no greater reward in life than the ability to be able to connect with others. Music gives me that opportunity every day, even if it’s just for three minutes. To be able to touch people’s lives through music, is an incredible gift and blessing that I acknowledge and give thanks for daily.”

With a truly distinctive voice and no shortage of hit songs in the pipeline, April Start is changing the way people look at pop music. Irresistible, clever, honest and perfectly executed, April proves pop is no longer a dirty word.