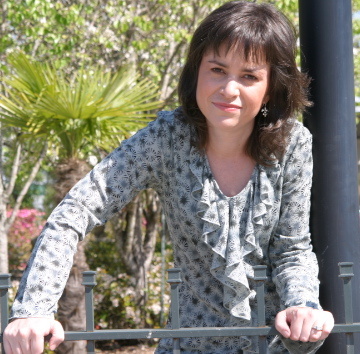 Carolyn Webb Russell was born in San Jose, CA and raised in the very small town of Robert, LA. She started taking piano lessons and became a Christian when she was 7, writing songs at 9 at a national level. Her first solo performance was playing the piano for offering at a small church in Bedico, LA when she was 9. As a freshman she auditioned to be the pianist for the school’s advanced choir instead the director asked her to be in the choir, never feeling like a vocalist, but she was co-erced to be in the school’s advanced choir. During her teen years, Carolyn was turned on to Contemporary Christian music when she heard the group Petra sing the song “More Power to Ya”. Having great music and great lyrics in her life inspired her to draw closer to God through music as a youth. Her influences back then were Amy Grant and Michael W. Smith today those artists influence her music along with Sara Groves, Kari Jobe, Norah Jones, Nicole Nordeman and numerous others! Carolyn, since high school, graduated from Louisiana College in Vocal Music Education and has been teaching Choir for 16 years, the very subject that she had to be co-erced into participating in! Not to mention the fact that she always avoided speaking in front of more than five people, avoided speech class in high school and college! God put her doing the two things she didn’t really plan on doing! The lesson she has learned in all of that is that God uses you sometimes in the areas you resist the most! The very class that inspired her to sing is the very class in the same building that she taught in for several years, teaching hundreds of other students to sing. Carolyn in 2004 started working on her debut album in Nashville. Along the way she met great friends in the industry and started singing some of her new songs locally. Then comes hurricane Katrina that stalled the completion of the debut CD. A couple weeks before Katrina Carolyn was able to complete three songs and those songs were placed on an EP in December of 2005. It wasn’t quite the debut album she had planned but in time she learned that the full album was in God’s hands in His perfect timing. That perfect timing happened in 2007 with the launch of CR91 Ministry. Christ Restores is founded on the principle that only Jesus can rescue and restore hurting relationships and is the answer to life. We cannot change people, but God can change the heart of people. Carolyn’s full album By Your Side was released in June of 2008 by Creative Soul Records of Nashville, TN. Carolyn is persistent in following God’s purpose for her life in sharing the story God has given her through music. Carolyn's heart is in sharing her story with women who are going through some of life's toughest times. Carolyn has performed all over the US and Internationally, venues including Carnegie Hall, Russia, Mexico, Canada, Ireland to mention a few. Carolyn has a heart for the people in Moscow, Russia and is eager to return! Currently Carolyn is an active part of the Creative Arts Ministry at Church of the King in Mandeville, LA and as part of that ministry host a songwriters night on a regular basis at St John’s Coffeehouse in Covington. Carolyn as a choral Director has had students perform at Pearl Harbor, NBA games and even with the Disney World orchestra. Her students go on to be music teachers and professional musicians all over the country. Carolyn loves her students, they are a part of their family. As a vocal coach she sees how influential music is on each of our lives and loves introducing positive music to her students and audience. Carolyn's album was recorded in Nashville with producer Eric Copeland. Recorded at Creative Soul, Dark Horse and Sunset Blvd recording studios in Nashville. Tom Hemby, Steve Brewster, Jackie Street, Aaron Herman and Jennifer Duncan are the musicians on the CD. CDs available through this site, or the band website, itunes and many other online media sources, cdbaby.com and ourstage.com.