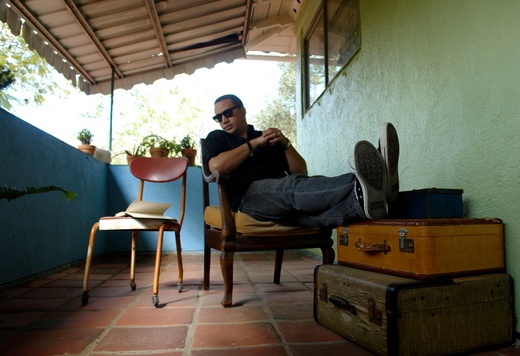 In an era saturated with R&B-pop music and hook-driven songs, Easy Soul (born Dominick Montgomery) combines classic soul with genuine storytelling to create a refreshingly authentic voice. Easy’s debut single, “If You Go,” rekindles memories of original Motown—when music was made from passion, talent, and the heart of a soul singer. To that memory, Easy adds a contemporary urban lyricism that connects with listeners across generations.

Reared in Rocky Mount, North Carolina, by his grandparents, Easy Soul surrounded himself with vinyl recordings of the great musicians that preceded him. Nat King Cole, The Temptations, The Jackson 5, Sammy Davis Jr., and Marvin Gaye poured daily from the family turntable. This set the foundation for the classic feel and soulful melodies that would be at the core of Easy’s music; however, being embedded in the R&B and HipHop music of today, his sound is a soulful mixture of two generations of sound.

Even as a child living in North Hollywood, California, Easy Soul spent days in studios and on sound stages with his father Derc Hotzog. Hotzog was in the throes of his own music career, singing backup and demos for artists such as Ollie Woodson of the Temptations, Lynda Lawrence of The Supremes, and Sherman Hemsley of The Jeffersons television show. In addition, Hotzog held showcases for artists such as Smokey Robinson and Sammy Davis Jr. The quality of this legacy is evident in both the person and voice of Easy Soul. Singing and songwriting were evident throughout Easy Soul’s upbringing, however, when he lost his grandmother as a teenager, Easy had no choice but to abandon music to provide for his family. He spent years working a 9 to 5 from shoe stores to factories, finishing high school with a perfect grade point average and full college scholarships. Those troubling times shaped a unique maturity that explains a body of music that belies his youth.

A need for a change of environment brought Easy Soul back to California in 2007, where a secure job and home made it possible for music to return to being a priority in his life. He started writing songs and performing, challenging himself to write and videotape daily.

Soon, Easy Soul was performing at R&B Live in Hollywood. Shortly after he was given a spot to perform for a Miyla Entertainment showcase at Stevies in Encino, California. Although last to perform, his sound and stage presence caught the attention of Michelle Johnson, CEO of Miyla Entertainment Inc. They met soon after, along with super-producer Mal G, and Easy Soul signed his first management and production deal. He later went on to sign a full recording deal with Miyla Ent.

Easy Soul and Mal G have formed a musical bond with one another. The smooth jazz and class in the production, paired with the lyrics, melodies, and harmonies, have created a genre of its own. A genre that can be described only as “Easy Soul”. “I make music for those who demand quality,” says Easy. “Music has always been in everything I do—it is an outlet to use my heart and mind in creating an imperfect beauty that everyone can not only relate to, but can see themselves in.” Easy, a family man, lives in California with his wife and son, and is expecting another child in late 2011.