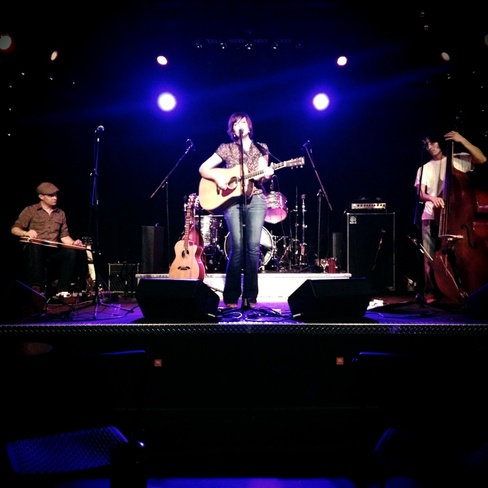 In the modern haystack of independent art Hannah Miller’s needle shines. With songs as soulful as the deep south, as soothing as a glass of rich red wine, as stirring as a wept prayer in a rural chapel and as sultry as an August evening in her native Alabama, her music is slowly finding its way.
Miller’s song “Keep It Simple” was licensed by NBC for the prime-time medical drama Mercy and outfits like American Songwriter, Performing Songwriter Magazine, Lilith Faire, MTV, The International Songwriting Competition and iTunes’ “Indie Spotlight” have all taken notice. “I’m in no hurry,” she says of the five year journey that has seen the release of three EPs and one full-length LP and hundreds of live concerts throughout the south, southwest and Midwest, “But I am eager.” Having relocated to Columbia, South Carolina after college, she called that area home until relocating to Nashville in 2010. “These years have been about development,” she adds. “I’ve learned a lot about perfecting both the craft and the business of a career in the music industry, but in a lot of ways I feel like I’m just getting started."
Miller’s literate style blends blues, folk and gospel which, when led by her disarmingly intimate alto, feel immediately familiar and compelling. Numerous magazines and blogs have taken note. Reviewers have fallen over themselves looking for comparisons. Names like Neko Case, Feist, Rachel Yamagata, Liz Phair, Brandi Carlile and Basia Bulat are regularly referenced. She has held her own when opening for Langhorne Slim, Landon Pigg, Elizabeth Cook, Josh Joplin, Shannon Whitworth and others and has cultivated a passionate following around the country. Drawing inspiration from many of her heroes’ music as well as their tenacity in the face of a declining music industry, Miller is genuinely grateful to have a seat at the table. "This new world for artists is very exciting. I know there is always a lot to learn and I know I’m definitely not the first to walk in these shoes, but they do feel like a right fit for me.”
The audience seems to agree. Miller successfully funded an ambitious multi-year release plan through her growing tribe of faithful fans. The series will include three EPs (the third of which, Doubters and Dreamers, released June 12, 2012) and a forthcoming vinyl compilation. Leaving no virtual stone unturned she has diligently employed every on-line tool available to her. Her first two videos have turned heads on YouTube with a sense of style and production value that seem positively major-label in their quality. “I’m amazed at the response we’ve seen to the videos and the Kickstarter campaign,” she says. “It’s great to know that the work I’ve put in so far is so appreciated, and to have the next year all laid out for me.
Miller has worked with several acclaimed producers, including Ian Fitchuk, Justin Loucks, Neilson Hubbard and Grammy Award winner Mitch Dane. She writes with many of Nashville’s finest and has her sights set on a long and meaningful career. While she is always open to discussions with record labels, publishers, booking agents and managers, she knows now that her future is in her own hands. “I’m always honored when anyone from the business is interested in what I am doing. Partners are good to have. But it’s also very empowering to know that I can do this on my own. It’s a lot of work, sure,” she says with a grin, “but it’s better than any real job.”