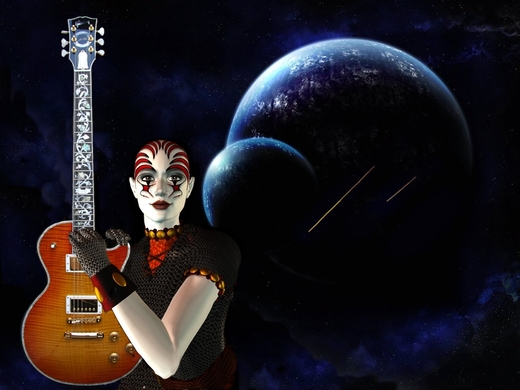 Mindmoviehas been playing in various bands for almost a lifetime. He started out as a guitarist, and still loves this instrument for all it has to offer. Yet time never stops, and much has changed since Mindmovie laid hands on his first second-hand six-string. Today, his main focus is more on the production and composition of all kinds of electronic, pop and rock music, and the sounds of his guitar have become just one ingredient to be added to a new tune, albeit a very special one. Apart from his work as a composer, Mindmovie is currently involved in two band projects, the first of which is Flaming Bess, a progressive rock band founded in the late 70s.  The second Band is  Wi:Re  (Wierschem vs Reimer) and has so far released two ep's  on VIM record
So far Flaming Bess have released five albums:

With his first  solo Double CD's  „An Ocean Of Dreams“ and "Happiness And Tears" Achim Wierschem, aka Mindmovie opens a  new exciting chapter perfectly designed to please all friends of progressive rock music worldwide.

The limitited Edition  of „Mindmovie – An Ocean Of Dreams“  contains  135 minutes of expressive, cinematic, mystic and guitar orientated music  in best tradition of bands like Pink Floyd, Camel, David Gilmour  or Joe Satriani .

"Happiness and Tears" takes it even one step further with over 150 minutes of first class innovative best quality progressive rock,  in an outstanding sound quality which will also be fun for all those music lovers who are in to high fidelity sounds.

Together with his colleagues of the band Flaming Bess and guest musicians from Germany, America, UK, Spain, Portugal and the Netherlands, Mindmovie delivers  real amazing and awesome productions representing international production standards.  Within the next couple of months Mindmovie will release his third solo double album so please stay tuned and visit the profile regularly  If you like what you hear  please feel free to order your Mindmovie CD