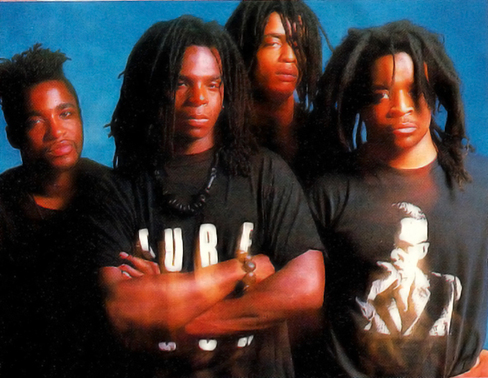 This Atlanta, Georgia-based quartet originated in the local hardcore scene in 1988, although the individual band members arrived from far afield: vocalist Doug Watts came from Detroit, bassist Jeff from Harlem, New York, and drummer Bernard Dawson from Los Angeles, while Jimmie Westley was the only Georgia native, from Savannah. Life was initially tough for a black metal band in Georgia, but the dreadlocked groups singer (D.WATTS) caught the interest of former Clash manager Bernie Rhodes, and he helped the band sign to Sony and they relocated to London, after meeting bassist  London-born Kwame Boaten the band was ready for the road . GREEN WITH RAGE introduced Naked Truth's raw, aggressive sound, which was given an individual slant by jazz and funk influences. Next they offered up READ BETWEEN THE LINES EP. The band were fortunate to pick up a UK tour with Scat Opera and Little Angels, after a MotÃ¶rhead support slot was lost due to a tour cancellation by lead singer (Lemmy),  The band built up a cult following, helped by a series of London residencies, before their next release FIGHT appeared, showing the band's ability to mix styles as diverse as jazz and death metal seamlessly and convincingly, while Watts supplied varied vocals, from rap to all-out hardcore rage, and intelligent lyrics.