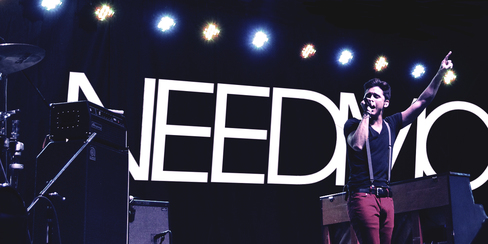 Reinvented - That is the central idea behind the new NEEDMORE new album, We Are.

"The world of music continues to transcend, and that's what I will constantly strive for with NEEDMORE," says their main songwriter and lead vocalist Garrett McArthur.

With their last release, Back At The Start, over a year and a half ago, the group is due for a release.

"We have all been through so much this past year, we really felt taking time off before being creative again was the best plan," says McArthur.

Currently, NEEDMORE is holed up in a Los Angeles - based studio, recording their third studio album. Having released their last EP on their own label, MMG (distribution via Island Def Jam), they remain completely independent - that is, for now.

Being named the #1 Rock Band by partners MTV and OurStage, and dubbed an "Artist on the Verge" by New Music Seminar, NEEDMORE obviously has appeal. So much so, they have independently reached #1 on several US music charts, and have been named and NME "Breakthrough" Artist in the UK. If that weren't enough, the band was featured by Microsoft, on the front page of their "Mindowns Media" campaign, had their single "Lost My Way" chosen for Delta Airlines, "in-flight programming," and have been featured in major motion pictures and promo's for television commercials. To say the least, the spotlight is on them.

Having several Grammy-winners in your corner, such as Jeff Juliano (John Mater, Train, Lifehouse), Brad Blackwood (Maroon 5, Alison Krauss), Ainslie Grosser (Chris Tomlin, Rebecca St. James) to name a few isn't a bad thing! Interestingly enough, the band is so much more than a great recording band. Their packed tour schedule speaks for itself. Having joined bands such as Train, John Legend, Andy Grammer, Mat Kearney, Gym Glass Heroes, Guster, Tony Lucca, and many more, the NEEDMORE expirience seems seasoned beyond their years.  What makes them more impressive is they've toured over 75,000 miles ON THEIR OWN, without the support of a record label.

Maybe it comes by way of their perfectionistic attitude towards their performance, or maybe it stems from the fact that when they tour, they play non-stop, 25 of 30 days per month. Whatever it is, everyone sees it. They have been invited back by 100% of the venues they have played, and have been a #1 booked act at NACA. It is safe to say their live show is a MUST SEE, and that it is only a matter of time before NEEDMORE is a household name.