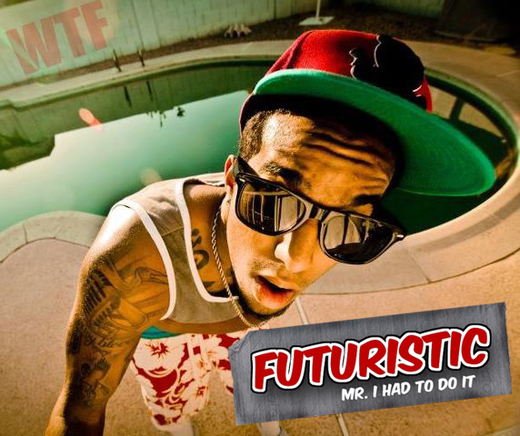 Growing up around music, it was inevitable that Futuristic would follow the path of his elders. Father Joe Beck was constantly consumed with his drumming skills, leading bands and competing in national drumming competitions while still running his greatly respected local DJ service. Future’s brothers Jason, Joseph, Quintin and Brandon are also musicians and participate in a wide variety of genresincluding Heavy Metal, Acoustic Guitar, Hip-Hop, Production, and Engineering. The youngest of this bunch of talented artists, Futuristic moved away from his family in Illinois and began to create a buzz of his own in Arizona opening up for acts such as Willy Northpole, Sean Kingston, E-40, Afroman, Machine Gun Kelly, Yung Berg, Yelawolf, The New Boyz, YG, and Snoop Dogg. Accumulating fans across the country, Futuristic unloads an array of lyrical genius on his first major album named after his trademark phrase “I HAD TO DO IT”. Since then he has dropped 3 mixtapes another album and got over 200,000 views from his music videos! Now he is working on his most intense, emotional, lyrical project yet called "Dream Big" which drops early February 19th 2012!