Formed in November 2003 from the ashes of a band known as Mermelada Maker, Overhate has set out to create thrash metal, with touches of progressive rock, a style the band created first to record a demo with songs like “Forgiveness" and “TV Show” (later to become “killing show” in their “god in a trench album). The band later spent 3 years getting into the tour circuit of Venezuela by reaching Valencia, Moron, Puerto Cabello, Margarita Island, Maturin, Puerto Ordaz, Ciudad Bolivar and Cali a city in the neighbour country of Columbia. Overhate’s first album “God In A Trench” was completed in 2007 as an album that denounces war, speaks about hate and despises human kind in 14 blasting tracks of pure thrash metal for a good ending to the band´s intense beginnings. Later in 2007 “God in a Trench” was released and picked up for distribution through their home land Venezuela and the band opened for the black metal gods Rotting Christ playing across the country again but now Overhate had started receiving radio and magazine reviews in several areas of North and South America. Since then Overhate has appeared in 6 different CD compilations with the track their title track  from God In A Trench, Blind War.

Overhate worked for a while with an American management company, which gave the band a good entrance to other markets and placed Overhate in the international map. After all this, the band found themselves in 2009 again writing new songs and leading themselves into the studio late in the year to record a new album which has now, after much hard work, sacrifice and dedication, been released June 2011. 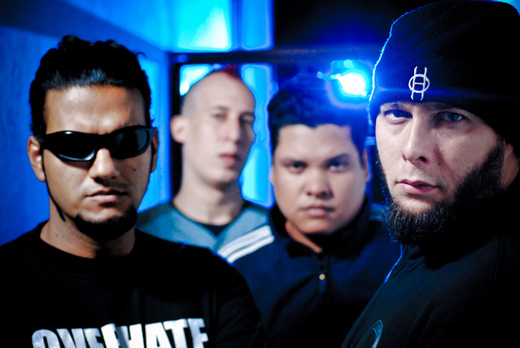