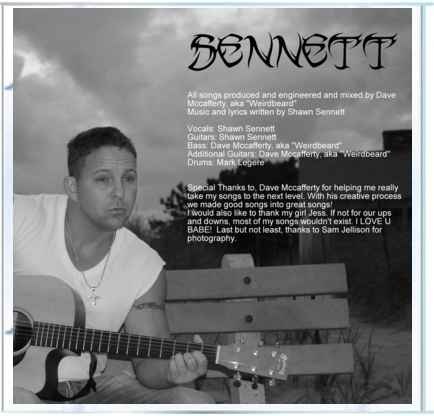 SENNETT.. Is a 1 man band of sorts with Shawn Sennett singer songwriter playing everything u here from acoustic guitar to ripping an electric guitar solo an bass lines on anyone of his songs.SENNETT has been working with Drummer Mark Legere for every song recorded with drums also recording with Dave mcafferty aka 'weirdbeard" who is producer/engineer of AudioFetishStudio. Shawn Sennetts music varies from slow flowing love songs to soft rock/90s rock with every song having a passionate deep sound with meaning and real life experience in them..Influances-heard in the music alice in chains,guns n roses,staind,kid rock. Although never that simple, many other bands influance new unreleased songs to be recorded.