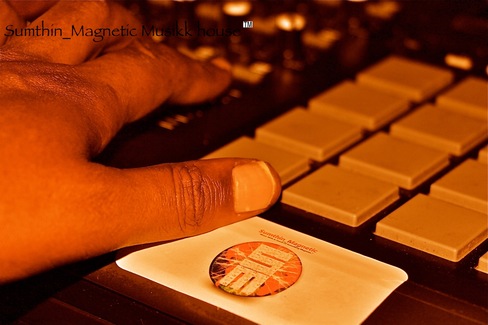 Sumthin Magnetic Music House was founded in 2005 in Iceland and early 2011 was legally established in Norway. The name was inspired by the song title ''Sumthin magnetic'' which was written by two of the owners, performed live but never released.

In 2007, Sumthin Magnetic put out "Feel the Charge", a three volume mixtape cd. The cd was a compilation of Soca music, Reggae and Hip Hop interjected with production by its in house producers, featuring local Icelandic artists as well as some artists from abroad.

The album was so well appreciated by genuine music lovers there's a chance you will get to hear it again in english........the revised version. Kær Leikur sold numerous copies and propelled Anna Hlin as one of the most creative and soulful songwriter/singers, with her own unique style, in all of Iceland.

In 2011, after a 3 year absence , Anthony Lewis decided to pick the pen back up and dropped his second album. The first being entitled Time, Money and Patience, released in Iceland late 2007 under EarMax Music.

The anticipated second album ''After the party, then what?'' critically acclaimed, takes you back to a New York era when hip hop was conscious and took Brooklyn back to its roots again. He, in collaboration with Sean Chase of Chase Music Group and LOJ Records Ent. , made this project a success.
Sumthin Magnetic plans to put out more material along side LOJ Records Ent. and Sniteville of Villanore Records, who are key player's in our development and the mastering of our music. Jason Nemor of Ole Folks Music who contributes his sweet soulful sounds from his vocals to piano and sax, as well as the talented Dj Skinny T who directs and produces video for Sumthin_Magnetic Music House.  Reykjavik's highness Anna Hlin released her long awaited second album, 'All Souled Out' July 16th 2012.

What began as a spark became a flame and is currently on fire.

They are an independent unit which includes Dj's, Mc's, singers, songwriters, performers,
producers, filmmakers, photographers, graphic designers etc.
They specialize in bringing talent to the forefront and into the spotlight.
They are the music industry and the music industry is them.

''People doing good music inspire us.
People doing their own music and bringing forth something positive is inspiration.''
as said by one of the owners.

Goals are set, Sumthin Magnetic plans to exceed all limitations and expectations
they will continue to bang out good music.
Likewise the Artists and Producers they are affiliated with, they will always have a forum with SM to
showcase their talent, their art form, their skills.
Anna Hlin says it best:
''We have to strive for perfection and challenge ourselves otherwise we don't get better.''