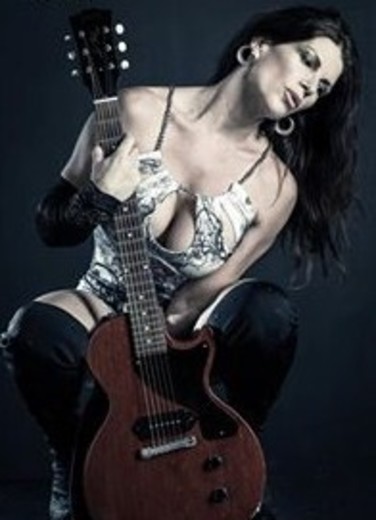 Tracy "Super T" Underwood is a Power House Female Rock Vocalist with a stage presence that will blow your mind! Her high energy and exceptional vocal range is nothing less than par excellence.

Her resume speaks volumes from being a professional session vocalist in Los Angeles, California and around the country to a very credible, established singer/songwriter/musician and has been involved in many other tours, performances and guest appearances on CDs.

Underwood plays many different instruments when it comes to writing music or playing live shows. You might even catch her playing intimate acoustic shows on occasion around the U.S.  She started playing flute at a very early age, picked up saxophone while always studying vocals under the highly respected Marvilla Davis.  Underwood has been formally trained in Opera and just recently went and spent some time with  Ron Anderson  in Los Angeles, Ca., who works with many incredibly talented super stars.

Ms. Underwood known by many as  "SUPER T" has been joined together once again with Joe Floyd of the band Warrior.  Joe Floyd is also a highly respected Producer/Engineer in the rock sectors in the greater Los Angeles area and abroad.  He owns the infamous SliverCloud Recording studios that was once based out of Burbank, Ca. and now resides in Redondo Beach, Ca.  Floyd and Underwood worked together in Burbank.  Underwood was a session vocalist for Floyd and worked on many projects in the studio with members of Poison, Ratt and many other high profile rockers.

During that time in L.A. Ms. Underwood also worked with Sir Harry Bowens (Was Not Was, Bonnie Raitt, Lyle Lovett) and is also joined once again with Sir Harry who is featured on some amazing background vocals with Underwood on the second release of the new CD.  She is also being joined by Dave DuCey former drummer for Warrior and is now playing and touring with National Dust.