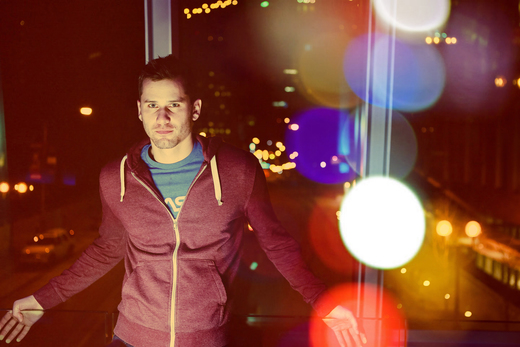 Andrew was born in a small town in Ohio called "Defiance."

His music is a blend of a few things you might be familiar with: catchy melodies, toe-tapping beats, rich instrumentation, relatable stories, lyrical themes of suffering, love, angst, and wonder, but all these elements are carefully sewn together into something Andrew hopes you have never heard before. He leads his songs from behind a piano and he writes straight from the heart; much of the time while it's still broken. Still, the songs bounce and the hooks stick with you. It's fair to call it "pop." because it is indeed sweet, but that's just the sugar that helps the medicine go down.

Andrew believes in truth above all else. Not shy about his own shortcomings, he holds very little regard for the conventional approach to song-writing, His music remains honest and it reflects his own humanity and self awareness. Exploring the burden and joy of romance, capturing curiosity and appreciation for the human condition, waxing nostalgic about childhood and struggling to understand his own mortality, his songs often twist and turn in unexpected ways. Sure, they might have a colorful candy shell, but there's something hidden in the middle. Something, hopefully, you're not completely used to. If you don't listen carefully, you just might miss it.

Andrew has been packing clubs all over the midwest creating a legion of fans. The consummate entertainer; passionate, energetic, and even comedic at times, he has over a thousand songs in his repertoire not considering a vast library of original tunes. Andrew's influences are as broad as a record store catalog. Ask him to play anything you want and the chances are pretty good that he'll actually know the song you request. Recently, however, people have been requesting some of his own songs off his debut EP, "Make Believe." After recording the EP at the Tracking Room in Nashville under the Red Armor label, he sold over 3,500 copies independently. He has since been featured on radio stations and blogs throughout the US and Europe as well as on MTV's "The Real World."

Not afraid of being dubbed a sort of indie pop star, Andrew is currently recording his next record in his home state of Ohio hoping to improve his sound and build upon an already growing fan base. The next record is turning out to be a bit darker and more revealing than the first. He says, "I'm opening up more this time around. Some of it is hard to share, but pain is popular. This isn't pop for pop's sake. I'm bored with that. I think this is bubble gum with razor blades in it."