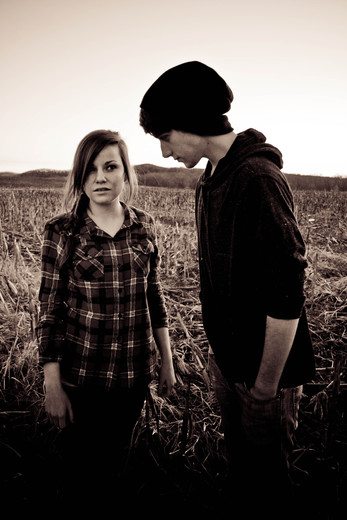 Matthew Campbell and Kg Lillian established their act January May in Union, Missouri. Matthew and Kg are skilled on many instruments, but mainly use guitar, piano, and vocals. Back to Back is January May’s debut EP which is to be released spring of 2012.

Matthew and Kg met up in fall of 2009 through the drama department at school. Kg had been playing guitar and writing songs individually when she saw Matthew playing with one of his two bands. Matthew and Kg began playing together at open mic nights after learning “Always Remember Me” by Ry Cuming and Sara Bareilles. After a few months of playing “just for fun”, Matthew and Kg decided it was time to write their own songs and become a band.

After many band practices with no successful outcomes, Matthew and Kg let their frustration drive their determination even further. On a summer evening in 2011, the duo finally wrote the first pieces to “Sinking Crown.” It was this song that became their first original and made them realize: this is possible! With one original under their belt, Matthew and Kg sprung into a songwriting groove. After months of writing they decided to release their first EP.

With an EP on the way, January May asked long time advisor Zech Campbell to manage the band. A busy man himself, Zech agreed to help, but could not take the full time job. Good friend Stanley Cooper now shares the position as manager with Zech. Photos for social media and advertisement would be necessary, so January May contacted Samantha Campbell and her company Framed By Sami to take on the role as personal band photographer. Many other people are also helping January May develop as a band, but it’s no doubt that the duo still qualify as independent artist.