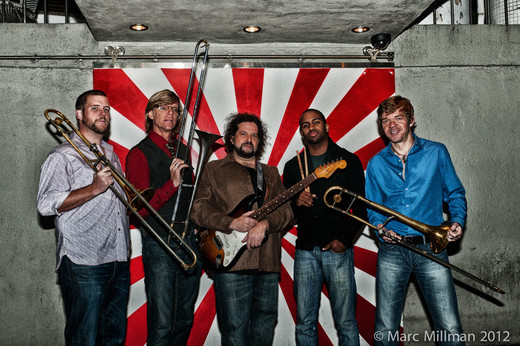 Even in a city that doesn’t play by the rules, New Orleans’ Bonerama is something different. They can evoke vintage funk, classic rock and free improvisation in the same set; maybe even the same song. Bonerama has been repeatedly recognized by Rolling Stone, hailed as “the ultimate in brass balls” (2005) and praised for their “…crushing ensemble riffing, human-feedback shrieks and wah-wah growls” (2007). Bonerama carries the brass-band concept to places unknown; what other brass band could snag an honor for “Best Rock Band” (Big Easy Awards 2007)? As cofounder Mark Mullins puts it, “We thought we could expand what a New Orleans brass band could do. Bands like Dirty Dozen started the “anything goes” concept, bringing in the guitars and the drum kit and using the sousaphone like a bass guitar. We thought we could push things a little further.”

New Orleans’ fertile club scene was directly responsible for Bonerama getting together. Trombonists Mullins and Craig Klein were both members of Harry Connick’s band, where they’d been since 1990. Both were looking to supplement this gig with something a little less structured. “Harry sets the bar pretty high, and you have to play it the same way every night for everyone to follow.

The big chance came in the summer of ’98, when Mullins had a weekly residency at Tipitina’s in the French Quarter. The club was then turning weekly slots over to some of the city’s favorite musicians, including Allen Toussaint and Cyril Neville; Mullins got charge of Wednesdays. Word got out one week that he and Klein were staging their trombone super-session and everybody they knew wanted to get involved. “It seemed that half the trombone players in town showed up,” Klein recalls. “At the end of the night we had them all onstage, maybe fifteen trombones at once. It sounded like a freight train; a big wall of sound coming right at you.”

Along with his jazz connections, Mullins is Bonerama’s resident rock ‘n’ roller: It was Mullins who instigated the offbeat classic-rock covers that have become a band tradition. Edgar Winter’s “Frankenstein” was the first nugget to get the treatment and songs by Hendrix, Zeppelin, Black Sabbath and the Allman Brothers Band have since appeared in their set right alongside the funk and jazz-flavored numbers. “There’s definitely something about the guitar and the trombone that are related,” Mullins figures. “You compare the fretboard to the slide; there’s a lot of similarity there.” Indeed, the sounds Mullins makes by playing through a guitar amp and wah-wah pedal may explain why he’s named Jimi Hendrix as one of his favorite trombonists. “It’s great to grab people with the rock songs, and then turn them on to some New Orleans music at the same time,” Klein says.

The buzz on Bonerama grew with hometown acclaim (with the band winning numerous OffBeat Magazine Awards; and Mullins regularly topping OffBeat’s trombone category), lots of roadwork, and three live albums – the first recorded close to home at the Old Point in Algiers; the second on tour in New York and the third album, Bringing It Home recorded live from New Orleans’ world famous nightclub, Tipitina’s. The Boston Herald called them a “bonehead’s dream”; the Vail (CO) Daily noted that “the sound is fat and wet; sometimes downright lusty.” As hometown music zine Off- Beat put it, “That nerdy kid in the band room with the trombone just might have the last laugh after all.”

The new EP Hard Times contains four studio tracks including the title track, “Hard Times”, the instrumental number “Folly” and “Lost My House” which was co-wrttten by Craig Klein and Dave Malone from the Radiators. These three new originals along with a cover of Led Zeppelin's "When the Levee Breaks" marks the band's first ever studio recordings. A bonus fifth track features a live performance of "Turn on Your Love Light" captured live from the stage at The New Orleans Jazz and Heritage Festival.

“’Lost My House’ is a true story inspired by the the levee failures in 2005. The verse was written by Dave Malone, who knows the story of the Rugalator. In the song, it is symbolic of losing everything, but still having the things you love and cherish. Some things can't be taken away," says Klein.

“The song “Hard Times” is really about the antithesis of hard times and flipping our fears over to optimism. To those that say all hell is breaking loose, we say kick out the demons and embrace all the positives that are always around us but often ignored in this world," says Mullins.
« View This Artist's Complete Profile
Connect with OurStage: Facebook Twitter YouTube FourSquare Newsletter RSS feed
ADVERTISEMENT
?Need help?
Copyright © Amazing Media Group  2006-2022
p
A
n
E
F
Song Title by Artist Name
987654d
LM
iAnEAqqqq