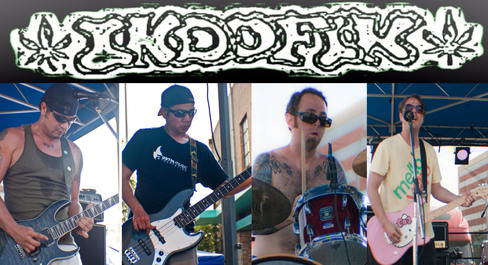 Day one: Members of the band Indofin quit their day jobs, abandoned their houses, and put all their belongings in storage. Day two, but really their first day on the road: smoke billows like a chimney from the tour van’s transmission. Day Five: the van is fixed and Indofin hits the road after several nights in a cheap motel. Day Six: Gun shots are fired! Indofin is hijacked on a deserted Phoenix highway. A band member gets pistol whipped and gangsters order the group out of the van. Still Day Six… the police arrive and say,“Welcome to Phoenix.” And here you have a day in the life of the reggaeskapunk band Indofin. From here, their story goes uphill, give or take a few road bumps, as they climb to the top of the reggaeskapunk scene in Texas and beyond
Fortunately for fans of “grooving skank basslines, reggaedub drumming, punk-influenced distorted guitars, and melodic rock vocals that just make you wanna party,” Indofin is a band that grows stronger in the face of adversity. They’ve been hailed as “a band to watch for” (New Music Spotlight), who “will delight audiences with their fresh musical approach to Reggae/Rock splashed with Punk and Ska” (RadioIndy). And FERNTV states that “whether they are infusing reggae, ska or punk in their music, their sound is definitely on point with a lot of soul” because as SKOPE Magazine reports, “the music these guys make is so good!
Indofin’s most recent release, 2X Broken best exemplifies how far they have come. 2X Broken was produced by Ben Blank (Trent Reznor, Killer Bs, Tribal Nation, Burning Spear, Bob Schneider, Alejandro Escovedo) who also engineered, mixed, and mastered the record along with band members TJ & Albert. Several tracks including Nonprofit, Honey, Fingerfight, Blue Light, Princess, Sunshine and Breezy One are receiving internet and college radio airplay. All together Indofin’s releases have been on rotation by approximately 70 internet and college radio stations around the country on notable podcasts available on itunes: Q’s House, New Music Inferno, Radio Orphans, Hangout Corp., Stampodcast, New Music Tampa Bay, and Fm102x Song of the Day. Indofin media outlets also include television appearance on Fox7 Good Day Austin and KEYE5
Other Indofin releases are their self-titled album “Indofin” which included hit tracks “Boozer Holiday,” “Put In Work” and “Run.” “Put In Work” was featured on Austin Punk Rock Compilation CD and Austin Music Network aired “Boozer Holiday.” The song “Run” was selected for the Skratch Magazine Warped Tour compilation CD and it charted at Number 2 Ska on Garageband.com. Other songs from their debut album, “Rule of Thumb,” “Zanbar,” and “Sir Slippy” were featured on the Student Body Calendars DVD distributed to college campuses throughout Texas and Arizona. Another single, “Bleed,” was included on the Austin Rockers for Life Compilation CD, a drunk driving prevention initiative. A band with a social conscience, Indofin recorded a live album titled Live @ Ruta Maya in Austin TX, released in digital format, and also mastered by Ben Blank, where proceeds were donated to help rebuild Haiti
From the early days of surviving on the road, Indofin has become a nationally touring band with over 300 shows in 50 cities. Noted for their raw energy and intensity, they’ve been a South by SouthWest favorite five years in a row. During SXSW, they played at the MusicGorilla Showcase 2010 and at the first ATX Wildfire 2010. They also won a performance spot at the Wakarusa Festival where they shared the stage with Fishbone, Slightly Stoopid, Dweezil Zappa, and Blues Traveler. The band’s performance at Wakarusa was recorded on to CD and DVD and featured on the Cool Music Network. Other winnings include a spot on the VANS WARPED Texas tour. In addition to SXSW, Indofin won the Texas Region Warped Tour. Recently, the band was honored to play at Texas Rockfest during SXSW, the San Marcos River ReggaeFest and Austin’s Batfest, both produced by Roadway Productions. Indofin has previously been sponsored by Texas organizations NORML and INSITE
High Times Magazine’s named Indofin their “Unsigned Band of the Week.” Indofin may be unsigned, but they have accomplished what many signed bands haven’t – on their own. With regional and national tours, internet and college radio saturation, TV appearances, numerous press accolades, and sold-out shows to loyal fans who have stuck with the band through thick and thin, Indofin is more than an unsigned band to watch for – they are a band who has nothing to prove. Their music and perseverance say it all. In the song Sunshine, Indofin says “’I’ve got sunshine on my mind, a heart so hard to find, baby no plans or places for me to go. Maybe tomorrow we’ll be gone, maybe tomorrow we’ll be gone…” Judging from their history, Indofin won’t be gone any time soon. In fact, Indofin will do what they do best – keep going.