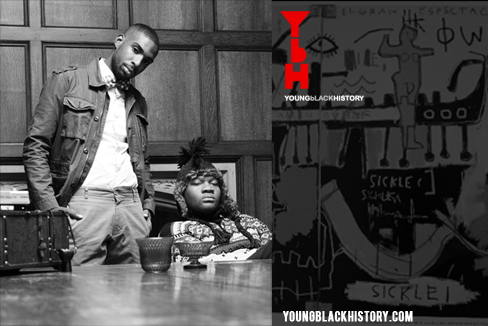 Every so often a rap collective emerges from the underground with a voice so vicious and a sound so earth shattering that the walls of mainstream hip-hop give way to their entrance.  If they have anything to do with it, YbH is next in line.  An acronym for “Young Black History,” YbH is a world-class duo with the lyricism and flow of yesterday’s rap legends and youthful energy and style of today’s ubiquitous chart toppers.  Best friends since the 2nd grade, they earned respect in the streets of their native Newark, New Jersey, pushing their unabashed 2011 debut album History in the Making the old fashioned way—selling copy after copy from the trunk of their cars building buzz amongst their peers.

YbH earned raves for their ferocious delivery, intricate perspective and unpretentious storytelling.  They would go on to perform multiple times domestically and across the pond, bringing audiences alive with their dynamic musicality and all-star stage presence. Those experiences gave YbH all they needed to develop their crowning follow-up project bLACK MAGIC, a hip-hop tour-de-force serving as their official introduction to the world.  The authentic production, strong songwriting and diverse musical range ofbLACK MAGIC elevates YbH from promising underground talents to fearless, radio-ready performers who maintain their artistic integrity while embracing hip-hop’s multiplicity.

The group’s musical balancing act starts with hard-hitting tracks touching on life growing up in the streets and parlays thought-provoking verses on everything from politics to philosophy.  Still, they manage to interject a few smashingly catchy club-ready jams, complete with R&B hooks.

Originally formed in the late 90s by childhood friends in Newark, YbH comprises 22-year-old emcees Dris and Duke bin Jokim. Upcoming producer O-Tiz, a longtime partner of YbH and unofficial “third member,” also helmed much of the production onbLACK MAGIC and all of the production on History in the Making.  “I first knew I wanted to do music for a living in elementary school when me, Duke and couple of guys used to write rhymes and compare them… We really were good even back then!” saysDris.

Authenticity, skill and chemistry are the key forces behind YbH and their future success.  “We want fans to get reality in our music… If we feel like talking about the Newark life we will… If we feel like doing techno we do that… We want them to get what it is to experience the different levels of emotion and that it’s okay to release it… If you corny be corny that’s fine by us (laughs),” saysDuke. Hoping to bring that reality far and wide, Dris adds, “We have no limit to what we are capable of doing in the industry… When we decide on something out of the ordinary it’s usually not far-fetched.”

With a universally dope new album and an ever-growing number of fans, who the group dubs “historians,” YbH are not shy about their intent to forever etch Young Black History in the musical history books.