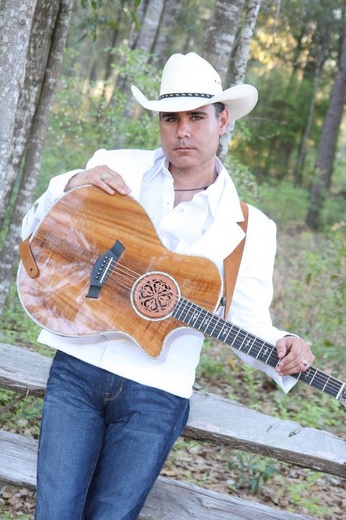 Artie Rodriguez is a native of the beautiful panhandle of Florida. His home town is Crestview, Florida but now lives in Defuniak Springs, Florida. Artie is married and has one son. Artie is a vocalist and songwriter. He plays guitar & fiddle when on stage. Staying true to his country roots, Artie loves to perform and entertain audiences around by performing traditional country music. Audiences & crowds all over love the way Artie inserts Spanish lyrics into his heart felt country songs. Artie began his musical career back in 1990 when he joined the country music group from Opp, Alabama called “Young Country”. Artie was the lead vocalist, songwriter and rhythm guitarist for the band till 1995.

While with the group Young Country, Artie was able to perform with several country entertainers and open concerts for artists such as Sammy Kershaw, Little Texas, John Anderson, McBride and the Ride and Neal McCoy. In March of 2000 he wrote a song titled “Forget His Memories” in honor of his father Arthur Rodriguez who is a former POW from the Korean War. President Clinton’s support staff heard the song and chose Artie out of 1800 people to perform for 10,000 veterans at the 50th Anniversary Korean War Commemorative Ceremony held in Washington DC in June 2000. Artie was then asked to perform in Branson, Missouri at the Dutton Theater for a Veteran’s Day concert. After performing in Branson, Artie began being notice in Nashville and drew interest from country artist Ty Herndon. In April 2001, Artie got to go on tour with Ty for the next 10 months. In 2003 Artie was the Northwest Florida Regional Winner of the Colgate Country Showdown and traveled to compete in the Mississippi State Finals. In 2004 Artie was also a finalist in the North East Florida Region of the Nashville Star competition.

Artie still today performs country music throughout the Southeast region of the United States and continues to draw crowds at opry style theaters. When Artie is not performing or songwriting, he is making a living as a deputy sheriff where he is often referred to as the “singing deputy”. You can say he’s a “Lawman by day and Country Star by night”.