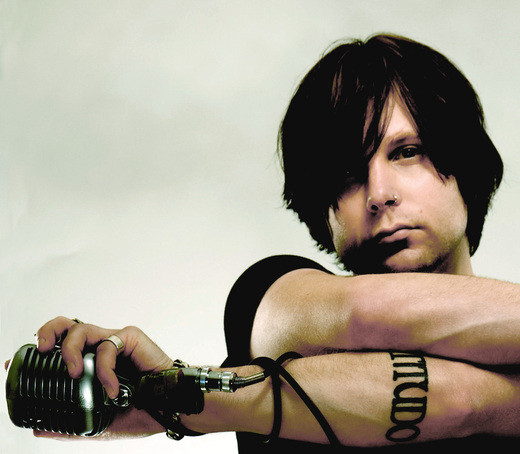 Joshua Ketchmark has made a damn good soundtrack to his life, and you should care. Why? Because it very well could be the soundtrack to yours. He rocks what he’s lived— from falling in love to crashing into heartache, watching friends self destruct to lifting them higher, searching for truth to landing on the rocks of reality. He delivers it all with melodies and riffs that leave shout-out-loud anthems ringing in your head.

Ketchmark grew up outside Peoria, IL, the adopted son of a conservative schoolteacher Mom and blues-loving manufacturer Dad. Straight laced as she was, his mother must have been a closeted music fan, too, because it was in her closet where he discovered an old acoustic guitar and a copy of “With The Beatles” that provided his early inspiration. He was an only child and the guitar he “inherited without permission” became his constant companion. It accompanied him throughout in his teens and on into adulthood, when he trekked from Illinois to Nashville.

In Nashville, he added electric guitars, bass and piano to his repertoire, and spent eight years doing what you do in Nashville—making friends, playing live, getting really, really good at songwriting.

“It really means a lot to me when someone says they can relate to one of my songs. I try hard to make that connection. I grew up listening to the radio, and when I hear a song from back then it takes me back to those moments in my life. It makes me happy to be on the giving end of that process now.”

His collaborations took him to Los Angeles. There, he was fortunate enough to land a dream side gig as a guitar tech, working with legends Rob Cavallo and Jack Joseph Puig, as well as Johnny Lang and Melissa Etheridge. Appreciation of his work led to the use of Etheridge’s famed 12-string on the recording of his debut album, List Of Regrets.

The opener, “How 2 Let Go,” percolates with the sound of that 12-string, as Ketchmark sings of a guy whose girlfriend has left him. The familiar heartbreak feeling of “I can’t seem to make it past the coffee today” stings even truer as he hears Elvis Costello play in the background. (Note: Ever bitter about a break-up? Put on “The Angels Wanna Wear My Red Shoes”).

Other slices of life include “Now,” a portrait of a friend whose walks on the wild side never find him happiness and “On Your Shoulders” about the passing of his father in 2003. In both songs, the introspective subject matter leap into rousing, anthemic choruses, showcasing what is Ketchmark’s finest songwriting talent: being able to take something intensely personal and make it feel universal. And with his knack for ear-catching melodies, those choruses lock into your head and find their way to your pleasure center.

Fellow musician and friend Pete Munday once said to him over a table crowded with drinks. “After you’ve finished something, it’s not yours anymore.” It’s one of his favorite quotes. And now that the last knob has been turned in recording List Of Regrets, the soundtrack to Joshua’s life can now become the soundtrack to yours. Turn it up.
« View This Artist's Complete Profile
Connect with OurStage: Facebook Twitter YouTube FourSquare Newsletter RSS feed
ADVERTISEMENT
?Need help?
Copyright © Amazing Media Group  2006-2023
p
A
n
E
F
Song Title by Artist Name
987654d
LM
iAnEAqqqq