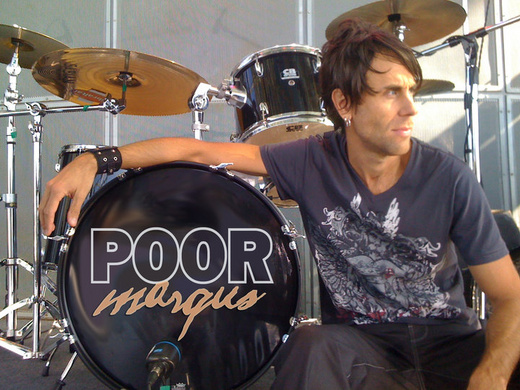 Marqus Bobesich (aka PoorMarqus) is quickly gaining recognition as one of Canada’s most prolific new artists. He has created a unique brand of music with his combination of intelligent songwriting and poignant lyrics. A pure singer-songwriter, Marqus draws from such favourites as Sting, John Mayer, Counting Crows, David Gray, and Jeff Buckley to inspire his own playing and writing.

After playing drums for 12 years, Marqus made the transition to vocalist while at university. Together with musician Shane Anthony, Marqus formed the group Woodrow, playing to folk-houses, coffee shops and university pubs. With the September 1998 release of “In Brightness and Beauty”, Woodrow was chosen as HMV’s indie band of the month, allowing them to perform at the HMV superstore in Toronto and open for Canadian group The Gandharvas. The band received airplay at campus stations across Canada, followed by interviews and live-to-air acoustic sets. Marqus’ songs from the album also appeared on various compilation albums, including Q107’s “Homegrown 18” and “Rusted Roses”, a tribute album for musician Jeff Buckley.

Marqus has received writing awards for his poetry, and his lyrics/poems have been published in literary magazines across Canada and the US. He also finds work as an actor and voice-over artist, having appeared in over 40 television commercials airing in Canada, US, Europe and Australia.

“Small Town Oceans” (2001) marked the debut of Marqus as a solo artist. Together with 2-time Juno nominee Karen Kane, Marqus received a FACTOR Demo Award for recording. Marqus later went on to record “These Machines are Perfect” (2002) and “The Latest Version of Us” (2003), both with producer Brent Bodrug.