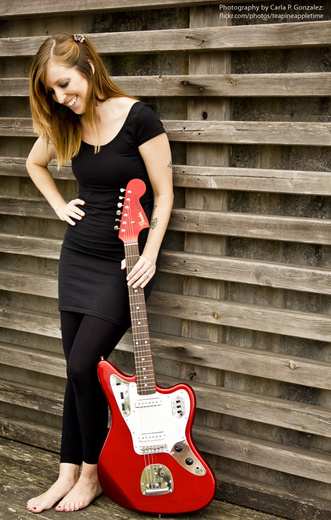 Ryli is a self-taught, multi-talented musician that draws from a wide range of inspirations. During her teens, she kept herself very busy, playing several live shows every weekend in Midwest venues with rock ‘n roll bands, punk bands, ska bands, folk groups, as well as solo acoustic acts. During this time, she became a seasoned guitarist, singer, bassist, drummer and pianist. It was obvious right away that music was her passion and that she’d continue to grow her musical talent. At age 19, she began to explore the world. Traveling Mexico and spending time in several US cities before finally making her way to Europe. She now lives in Spain, though continues to travel South America, Europe and make frequent trips back to the US. These far-flung places and musical background are cause for the very unique blend found in her music today.

Now, you can find Ryli making daily visits to her home studio to record and practice for her live performances. On her birthday, April 12 2010, she released her debut demo album, which immediately gained an ever-growing and dedicated worldwide fan base, thanks to her relentless online promotion and internet and college radio. She spent a year improving her studio and her recording techniques before recording her EP entitled Here I Am, which will be released on October 21st, 2011.