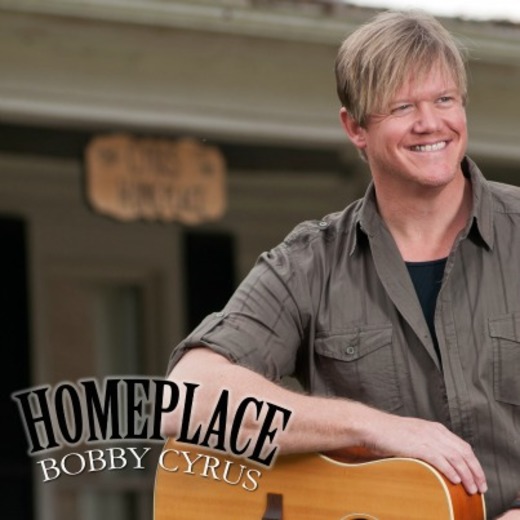 Bobby Cyrus knows that his famous surname is likely to raise eyebrows. As a younger cousin to Billy Ray, the expectations on a singer with the Cyrus name are understandably lofty. The self-described “civilized country boy” from eastern Kentucky doesn’t mind the inevitable comparisons, however. He’d just rather let his music do the talking, and with the release of his debut album, Homeplace, Cyr

us has certainly composed an impressive conversation starter.

“I’ve set out to share my own sound with the music I make,” says Cyrus in his characteristically warm, Country-gentleman tone. “I’d like to think that the words I sing and the people I sing about are relatable, because they’re all real. I’ve been making music since I was 22 years old, and I’m telling stories that actually happened. You can hear my influences in what I do, but my goal is definitely to put my own stamp on what I love. Let the people decide what they want to call it.”

A former heavy-machinery sales and management executive in the coal mining and construction industry, Cyrus took advantage of his time behind the wheel on long business trips to sharpen his songwriting craft and refine his smooth, hill-country delivery. He had already experienced some minor successes as a songwriter, with cuts being recorded in the Country, Christian and Bluegrass genres, but it wasn’t until he and Billy forged a bond in the mid-2000s that Bobby began seriously considering a career in Nashville.

“Both of our fathers died within about eight months of each other back in 2005,” notes Cyrus. “That really brought us closer, in a way. Billy and I had performed together a few times before in the past, but when he heard some of the songs I had written and was singing, he was really supportive.”

Cyrus is quick to point out that it was his father, Bobby Glenn Cyrus (known as Bob to most), who influenced him as an artist more than anybody else. And while he counts Waylon Jennings, Ricky Skaggs, Larry Cordle, Kris Kristofferson and Keith Whitley among his principal influences, there was one other individual that had a particularly profound and personal impact in Cyrus’ life: the legendary Tom T. Hall.

The story of how the two met is something of a tearjerker, and to hear Cyrus tell the whole tale is fascinating. The short version is that near the end of Bob’s life, Cyrus approached Tom T. about cutting a demo recording of one of the songs his father had written nearly two decades before. Hall graciously obliged, and a friendship was born that resulted in Bobby writing for the iconic songwriter’s publishing company, Good Home Grown Music, for several years afterwards.

“Music was a dream my dad aspired to, but never got to chase,” Cyrus reveals. “He chose to work and raise his four kids, and that in itself showed me what’s required of a man if he’s going to call himself a man. He encouraged and influenced me to do what I do, as well as to take care of my responsibilities. I learned to write songs by listening to his songs.”

Both Hall and Bobby’s dad make an appearance on Homeplace. Tom T. guests on the haunting “A Rose For Marie,” a song written by Hall and his wife, Dixie, and handpicked specifically for the debut project. The personal and reflective title track includes a poem recitation, recorded years earlier by Cyrus’ father, which inspired the song. Part of that recording is heard in the spoken word introduction to “Homeplace,” which Bobby counts among his favorites on the record.

The first single and music video from the album is a track Cyrus cut with Billy Ray, a light-hearted, tongue-in-cheek duet called “Milkman’s Eyes.” The video, shot by acclaimed filmmaker John Lloyd Miller, gives an entertaining glimpse into the chemistry between the Cyrus cousins.

“Billy is a very selfless guy. He worked hard to get everything exactly right on that song,” says Bobby of the recording process. “He didn’t just come in the studio, do it, and then leave. He wanted to rework the parts he wasn’t happy with, and even on the video shoot, he was real mindful and respectful of trying not to be in the spotlight. He wanted me to shine.”

Longtime friend and award-winning bluegrass producer/musician Don Rigsby produced Homeplace. And though listeners might hear strains of the bluegrass music that Cyrus grew up on, the album as a whole leans more on the traditional Country and Outlaw sound, as detailed in the semi-autobiographical opening track, “I Cut My Teeth (On Waylon and Willie).” The song is one of seven that Cyrus wrote for the project.