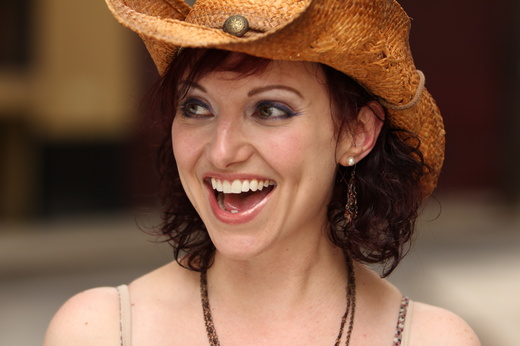 Angie Atkinson is a Brooklyn based musician with roots in Starkville, MS and Richmond, VA. Growing up in the buckle of the Bible Belt was a challenge for Angie, an early adopter of frequent hair color changes and a non-conformist sense of style. The positive attention she received for her incredible vocal ability was tempered with a healthy dose of negative attention for her appearance. She always dreamed of living in New York City, a place where she could be as weird as she wanted, yet normal by comparison. In 2009, Angie started her life over in New York with very little money and a guitar she was still learning to play. She focused primarily on her acting career during her first year in the city. Then, while in East Texas for an acting gig, she had an epiphany. Something about being in the South again inspired her. Maybe it was the easy sounds of the nearby local honky tonk that drifted through her window every night. Maybe it was the good-hearted East Texans and the forthright way they expressed themselves, so conducive to Angie's frank and personal lyrics. Or maybe it was just all the damn good barbecue. Regardless, Angie resolved to put down the scripts and pick up the guitar. She went back to New York with songs pouring out, and couldn't wait to share them with the world. They say you can take the girl out of the South, but can never take the South out of the girl. Angie could never forget her deeply ingrained Southern roots, and it is this blend of country mouse/city mouse influences and inspirations that makes Angie's alt-pop-country so unique.