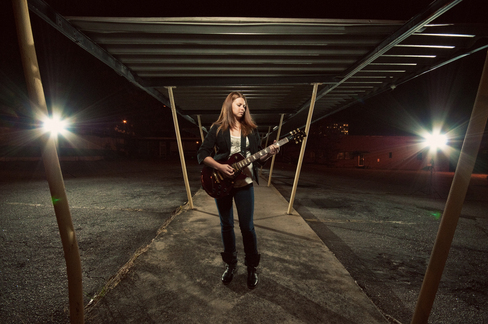 Heart on her sleeve. That's how the lyrics of singer-songwriter, Catie King, are worn. Deeply honest and moving, immersed in dark chord progressions and minor keys, her lyrics invite you to sink comfortably into her sound.

Catie was born and raised in Raleigh, North Carolina, and the warm, laid-back style of the south is reflected in her music. A tenacious athlete, she picked up the guitar at age 13 to satisfy her need to express herself in a more artistic way. The challenge and potential Catie found in songwriting hooked her early on.

At age 16, after tiring of computer recordings, Catie entered the studio for the first time where she met producer Dick Hodgin. Her initial efforts drew general scorn and criticism from the well-known "Dream Assassin", but it was obvious to Hodgin, a miner of numerous southern vocal jewels (Hootie and The Blowfish, Craving Melon, Flat Duo Jets) that Catie possessed something unique.

Her high school years were filled with talent shows, YouTube videos, and small local acoustic performances. The next 4 years had King balancing her athletic endeavors on the basketball and softball teams with an array of "assignments" from Hodgin to improve her timing, song structure, vocal delivery and lyrical arrangement.

In her time hanging around Hodgin's studio, Catie would soak in the hallway overflow of artists ranging from Clay Aiken and Anoop Desai to Lynyrd Skynyrd and Jason Michael Carroll. Hours upon hours of hard work matured into a small EP release titled, “Between The Lines,” which brought her to the first dwarf star, "Stay", a song she proudly played for Hodgin with the cursory promise of "structure".

From there, the songs came in bunches. Each one a confession of introspective call-and-answer. Hodgin assembled crack studio musicians around her to began the grande alliance that was to become "Catch and Relase". 10 dark, angst-ridden tracks of love, youth and hope. Tragic lullabies of vocal osmosis framed by musical support from Christian Rocker Chad Lister on bass, Jeremy Medkiff on guitar, Chad Barger on Hammond and piano and John Pahl Ferrell on Drums.

Catie's magnetically quirky stage presence quickly became the buzz of Chapel Hill where she attends college at The University of North Carolina. Adding the "rest of the band" to her already electric solo presentations rapidly moved her onto the playing field of local contemporary artists. Her CD release show in Chapel Hill for Catch and Release was standing room only. Now the hard work begins.

An avid social networker, Catie King is currently expanding her fan base outwardly over the music-rich state of North Carolina.  Between school and starting work on a new EP, Catie co-founded UNC-CH’s first online campus music culture magazine, Resound Magazine.  She plays often in local venues like Local 506, Deep South the Bar, and the Soap Box in Wilmington, and the best way to connect with her is to make it out to a show!