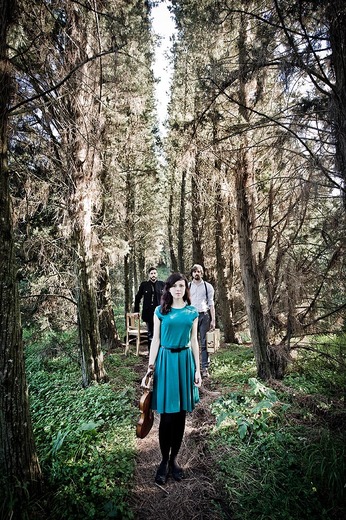 Reviewed by the Dutch magazine Heaven Magazine as one of the most interesting and original Americana groups around the European continent, the Portuguese band a Jigsaw has released in 2009 their latest album Like The Wolf, the follow up to the hailed debut Letters From The Boatman (2007). Named after the Belgium band dEUS song “Jigsaw You”, this indie folk oriented band is made up of three multi-instrumentalists musicians. Joao Rui, Susana Ribeiro and Jorri. In 2007 they released a concept album called Letters From The Boatman. A handful of guests, including some of the most prominent musicians of the Portuguese scene, took part of this project. The album climbed the charts on national radios, it was considered one of the best of the year and the band was also reviewed as one of the best live acts. As to the second album, they decided to take matter into their own hands and gather some of the instruments they had met along the way. The result was a beautifully textured album with detailed arrangements. Recorded between December 2008 and January 2009, Like the Wolf is a return to the concept album format. The record has two mesmerizing duets with Arizona’s Becky Lee Walters and Joao Rui that linger for a long time, even after we press stop. Like The Wolf was considered by the media as an “irresistible”, a “compulsory” and an “addictive” album. Many say it was the best album of the year 2009. The a Jigsaw released the first Like the Wolf’s video (Red Pony) in January of 2010. In February, they began their “Like The Wolf European Tour” that took them to 12 countries, such as France, Italy, Spain, Belgium, Switzerland, Slovenia, Poland, United Kingdom, Austria, Germany, Spain, etc. Still in 2010, The duet “Return to Me” featuring Becky Lee Walters received an honorable mention from the International Songwriting Competition (USA/2009) and of the Think Tank (Italy). On June of 2010 the band was invited to the Spanish National Radio 3 to present the second edition of Like the Wolf (Like the Wolf Uncut) that became available in several stores around Europe. In January of 2011, a Jigsaw returned to Portugal to record their new album, scheduled to be released by the end of the year.