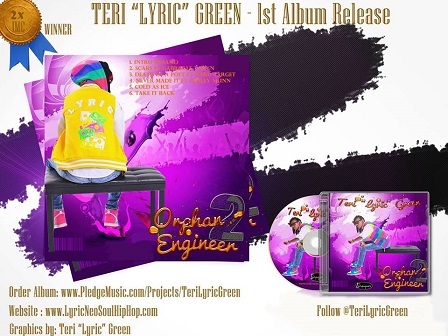 Hip hop artist Teri “Lyric” Green, fourth runner up in YOBI.tv and Myspace’s first ever “Take the Stage” competition with Rodney "Darkchild" Jerkins and Johnny Wright, is as unique as they come. Unsigned Only International songwriting competition 2013 winner for Rnb/Hip Hop. Lyric was also crowned a champion in L.A 2013 at the Indie Music Channel Awards she was nominated in 2 categories and swept the competition bringing both awards back to Chicago/Indiana. One for best Rap Song and the second for Best Rap Recording Lyric not only wrote this song, she produced it..

Lyric went from orphan to engineer, becoming emancipated from Jane Adams Hull House in the suburbs of her native Chicago, Illinois at the age of 21. Deciding to overcome the unfortunate hand she had been dealt, Lyric gained her education in technology and engineering and established a career as a computer programmer/broadcast engineer while continuing to pursue her love of music. Her technical knowledge allows her to produce her own music, resulting in a signature sound that is uniquely her own.

Lyric performs spoken-word hip-hop and neo soul. In 2011 her original song, "Can't Back Down", was nominated for song of the year at New York City’s Underground Music Awards. She was chosen as one of the finalists for the Coors Light Sponsored, "Looking for the Coldest" MC competition where her song, "Cold as Ice" was promoted and downloaded over 22,500 times. Lyric’s song “Death of a Poet” was also nominated for Song of the Year at the 2011 Music in Media Awards in Hollywood, California. She recently challenged herself to perform on fifty mics in sixty days, a feat that took her across the United States and even to Jamaica. Making her and Independent International Hip Hop artist. Teri Lyric Green is currently ranked in the Coors Light Search for the coldest MC competition in the top 5 in the Chicago Market leaving her still in the running to becoming the coldest 2013.