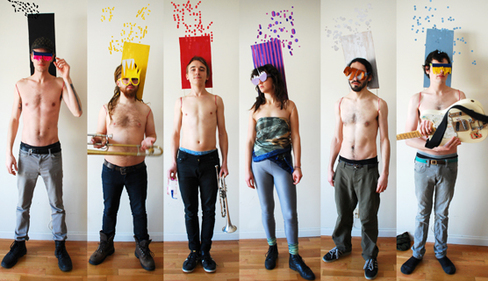 This spring the rapturous, octet, Rubblebucket are releasing their first live CD/DVD in conjunction with a U.S. tour. Live in Chicago features hits from the band's 2011 Omega La La, which was produced by Eric Broucek (LCD Soundsystem, !!!, Holy Ghost) at DFA Studios, and mastered by Joe Lambert (Animal Collective, Dirty Projectors, etc.). However, veteran fans will not be disappointed as Live in Chicago also includes old favorites such as: "Bikes", "November", and "Philips Van" from Rubblebucket's self titled debut

Of Rubblebucket's recent sold-out Bowery Ballroom gig in NYC, CMJ writes, "Unprovoked chants of “RUB-BLE-BUC-KET!” and “Let’s get weird!” rebounded about the empty Ballroom stage. Things would get weird. They’d also get loud, sweaty, ebullient and adorable, in that order."

Paste“Joyous jungles of worldly pop-funk, instrumentally rich but catchy enough to ass-kick Katy Perry off the pop charts (in a just world)—mega-melodic without sacrificing an ounce of atmosphere or creativity.”

CBS The Street Date"Very few bands of the hipster generation care to challenge the confines of a song structure as vigorously and successfully as Rubblebucket does throughout Omega La La.

LA Music Blog “They sound like hippies who have taken over a city, hog-tied any uptight citizens, and painted all the yucky grey/brown buildings in acrylic colors and neon war paint.

SF Weekly “What it sounds like when eight different freak flags fly in perfect unison.