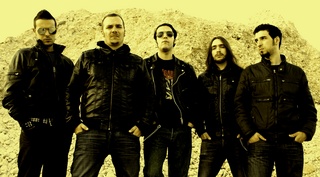 A long long time ago…Some wannabe punk kids tried to create a masterpiece of their own. Year 2002, DOLLAR LLAMA was born. Obviously, the grungy style, the long hairs, the pose, the jumps on stage, weren't enough to succeed… Not at that time… The maturity, the feeling, the attitude, the creativity, the power(!) brought DL a new kind of perspective, very rare nowadays...This was our principle and our winning chance. Rock n' Roll is to be felt, not to be shown. And so this band took their believes to every single stage that they played… sometimes the music become secondary, when the spirit is present, when the audience feel and read what's in our mind. That's our key, our telepathic key to success, or something like that (lame!)… We are still alive, becoming stronger... And that's because our friends, family, and fans give us energy to go on, to keep fighting!

We believe in Rock n Roll, in our Rock n Roll, and we're gonna keep playing louder and louder till everyone has heard our motive, our faith, our fuckin' music!

Now DL are ready to hit the streets with their new and debut album "Under the Hurricane"!

UNDER THE HURRICANE - was recorded and mixed at Crossover Studios, in Lisbon, between September and beginning of October and his producer was Pedro Sarrufo, lead guitarist of the legendary hardcore portuguese band TRINTA E UM (31).

The mastering was done in the United States, at Spectre Studios ("Mastering Studio of the Year" in the Seattle Area Music Awards) in Seattle, by Troy Glessner (He Is Legend, Norma Jean, Underoath, Demon Hunter, August Burns Red, Project 86).