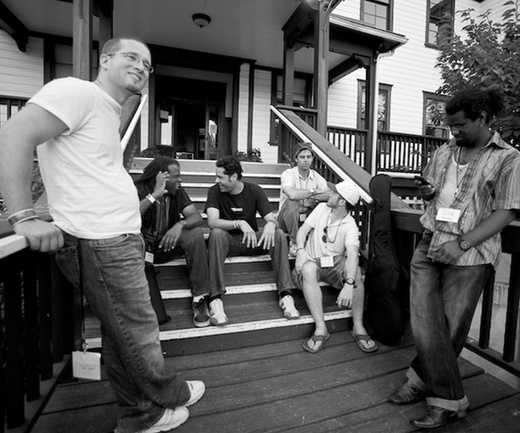 “Unique Latin sensibilities with plenty of rock, a shot of salsa, a shed-load of funk, and some high-speed Colombian cumbia …” Latin revolutionary sloganeering, environmental concerns, global politics and clenched-fist leftist anthems all bounce over the bands leftist grooves. Santa Lucia first came together in the early 2000s, playing Latin-tinged ska in Vancouver clubs. By the middle of that decade, the band had evolved an increasingly more funk sound and a distinctly political edge,

The band’s been active for almost 10 years. And in that time, it’s gone from the cusp of hip to…the cusp of hip. “We were always the band opening up for the new hip thing”. says German Cantillo, the band’s fronting vocalist and guitarist. We’d play and they’d play and six months later, that scene was dead. That band would later change their haircuts and reinvent themselves, and we would still open for them”.

But despite the band’s seemingly static state, Cantillo says he’s quite comfortable with the perpetuation. “You don’t want to live and die by a scene”.

The guys who brought Rock en Español to Canada are at it again. The Streets/Las Calles was arguably the first LFR album in Vancouver. The second full CD from Vancouver's purveyors of LFR - Latin funk rock - shows a lot of development from its debut. For one thing, the core membership now numbers nine. With four horns, two percussionists and more confident and searing guitar work from leader German Cantillo. There is also more stylistic variety found in the 11 tracks. The opener "Mozambique" is a full on rocker while "War" is a funked up ska type track. The lyrics are political and fairly angry, putting the band in the same company as Ozomatli and others. Grade: B-  Stuart Derdeyn The Province.