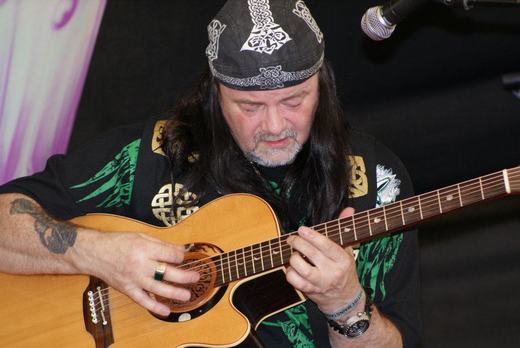 An acoustic warrior with an acoustic guitar as his
weapon, Martin Lucas - aka The Celturian - has been
captivating audiences with his unique musical style.

The Birmingham-based self-taught musician, who has
also been dubbed the Celtic Jimi Hendrix, has raised
the popularity of Gaelic-themed music to new levels
by pioneering its performance on acoustic guitar.

With no margin for error, Martin relies on concentration
and muscular fingers for his continuous solos
that veer from heartfelt melody to frenetic flurry.

Having experimented in the Celtic format since the
1990s, his style involves using the entire neck of his
Takamine guitar in fast reels, using open tuning with
up to three capos or more to present a richer range
of chords.

In 2006 Martin's music took off in America, with a concert at the Sidewalk Cafe in New York receiving a rapturous response.

The Celturian - Martin's own word to help define his music - is now taking his Celtic acoustic format to new heights
with the recording of a new album, Samurai Rose, in collaboration with singer-songwriter and martial artist Fay
Yvonne (Fay Goodman). The all-original work, produced with the musical backing of Rick Wakeman and studio support
from Louie Nicastro, producer of The Stranglers, is due for release in June 2010.

Fay has produced three albums of solo work - Kokoro, Creative Spirit and Head in the Clouds - that successfully
fuse her interests in music and martial arts.