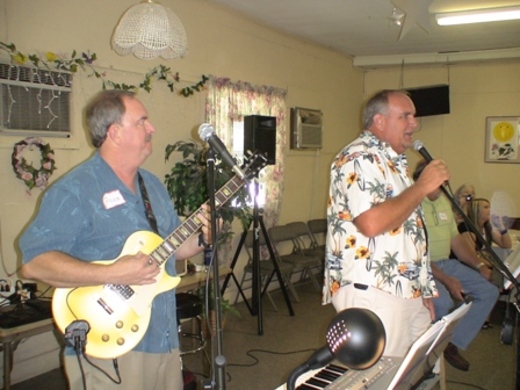 Ken, 64, has been playing guitar and writing music since his early teen years. His first band, named the "Vistones" eventually became "Kenny and the Nomads". Ken eventually started "The Chosen Few" which played for weddings and on Bourbon Street in the late 60's and early 70's. Ken and Ross collaborated on the " Mardi Gras Time " collection a few years ago. It is a collection of local flavor Mardi Gras and New Orleans highlights. They also put together some love songs, Christmas songs and country songs. Ken is now retired from music, but still enjoys the occasional Karaoke parties the family has throughout the year. Ross, 59, started on the drums in his Junior High School band and played them in his neighborhood rock band during that time. He learned to play the guitar from his brother, Kenny and eventually started another band during his East Jefferson High School days named "SUNA "- (pronounced sun-na), which he switched from the drums and strictly played guitar. Suna consisted of three lead singers with awesome harmony backed up by Ross playing rhythm, a lead and bass guitarist, keyboard player and drummer...eight members in all. The band played at various parties, school dances and weddings. The sad news is that there were reel to reel recordings of their music, but no one knows how to find them today. The band was dismantled by the enlistment of several members to serve our country in Viet-Nam. Ross is still playing the guitar and writing songs, and has picked up on playing the keyboard/workstation which he enjoys composing with today. He and his brother, Brian are currently working on "Pepere' on da Bayou " a collection of Ross' latest works. Brian, 52, has never played any instruments seriously, but is an amazing vocalist. He sings at his church, and made the finals recently in a local talent contest singing his rendition of Garth Brook's "The Dance" that puts Garth, himself to shame. He has been doing the vocals for Ross on all his new songs. Brian is always the hit at family Karaoke parties, and performs some of the most beautiful Christian music.