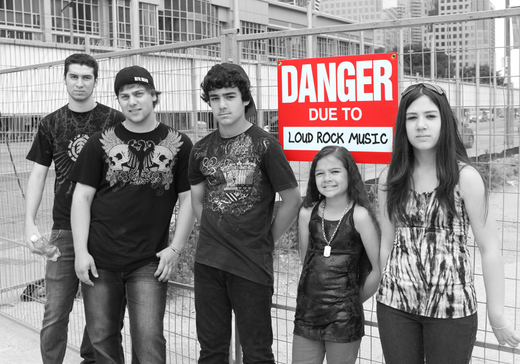 It's not often that you come across a rock band that is lead by a 10 year old female singer. Well that is exactly what Motion Device is!!!

Sara Menoudakis, along with her 13 year old brother David, 15 year old sister Andrea, 18 year old cousin Josh and 18 year old family friend Alex make up one of the most unique rock bands on the planet!!!

DO NOT BE FOOLED BY THEIR AGES - this is a professional gigging band!!
They have been performing for more than 5 years and have a long set list of cover songs and originals that really rock the house!

The band has recently been tweeted and praised by such celebrities as Steven Tyler, Alice Cooper, Steve Vai, Amy Lee & Zakk Wylde just to name a few.

This up and coming rock group has been on Canadian television stations City TV, Rogers TV and headlined the Canadian National Exhibition in Toronto.

They are scheduled to make their National TV Debut on CTV's Canada AM in August and are playing the halftime show in front of 20,000 for the Toronto Argonauts at The Rogers Centre.

Please visit our Youtube page to see and hear what we are about .
There are almost 50 videos, so please take your time and view as many as you can, especially the recent ones.
http://www.youtube.com/OfficialMotionDevice