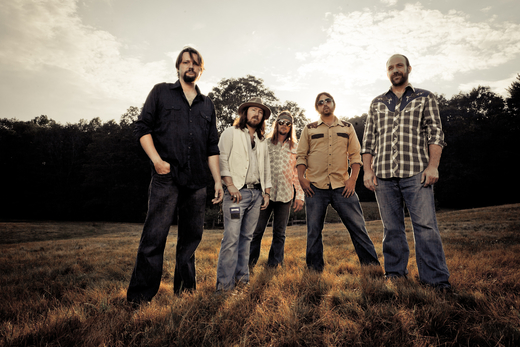 While their name suggests specters from light years away, Ghosts of Jupiter are actually cosmically switched-on earthlings with a gift for rock with wide-reaching implications. There's heft to this Boston-based quintet, who draw inspiration from the muscular, freewheeling hard rock of the 60s/70s and meld it to the serious crush of contemporaries like The Raconteurs, The Black Keys, and Rival Sons...

While many have used Cream, Hendrix and their gifted peers as a springboard, Ghosts of Jupiter create music that's alive in a way that echoes the vibrancy of their ancestors. Put on their self-titled debut to hear a band who believes in rock's power to explore and rejuvenate; a colorful, tough and tight ride into the outer reaches of the mind

Ghosts of Jupiter know how to stretch into the possibilities of a song but their overall approach bears a closer resemblance to Zeppelin -- powerful, gripping and capable of surprises at every turn. Nate Wilson (lead vocals, keyboards), Johnny Trama (guitar), Adam Terrell (guitar), Tommy Lada (bass), and Thomas Arey (drums) combine balls and high-end musicianship that makes them a contemporary and healthy competitor to Wolfmother, Kings of Leon and others at the forefront of today's real rock movement