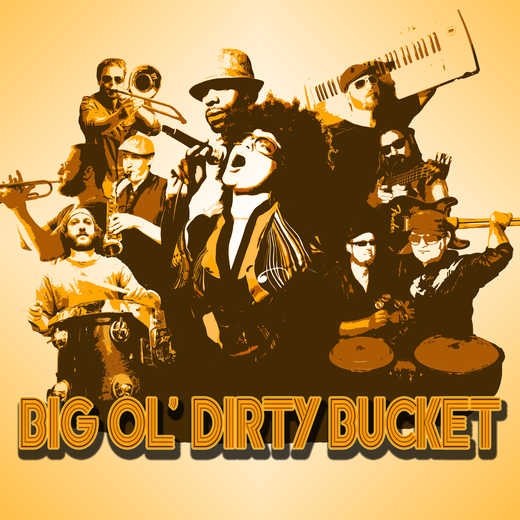 Described as "Parliament-Funkadelic meets Aretha Franklin at a Jay-Z concert", Big Ol’ Dirty Bucket entertains with an energetic and engaging stage show that whips the dance floor into a frenzy and leaves every audience member sweaty and screaming for more. The band’s sonic elements pay homage to its influences -- 70’s Funk and Soul music spiced with touches of Latin rhythms and seasoned with a touch of Hip Hop -- creating a uniquely funky and fresh listening experience. The 10-piece band complements its seamlessly tight hooks and dance grooves with bouts of over-the-top musicianship, and the result is a sound and performance that is musically intricate and complex yet accessible to even the most casual music fan.

Fueled by a propulsive rhythm section and led by the powerhouse vocals of front woman Sarah “Lil’ Shrimp” Seminski, Big Ol’ Dirty Bucket surged onto the local Boston music scene in May 2010 with its inaugural appearance in front of a sold-out downstairs crowd at The Middle East. A cascade of well-attended Boston Area appearances followed the performance over the next year, including an appearance on the main stage of the 21st Annual Boston Freedom Rally alongside chart-topping acts such as Tracy Bonham and Onyx.

BODB's inescapable live energy launched the band into first place in the Wormtown Trading Co. “Battle of the Bands” in the winter of 2011, consequently earning them a midnight Saturday night set at the Strange Creek Music and Art Festival alongside jam band and folk rock legends Max Creek and Strangefolk. Since then, Big Ol’ Dirty Bucket has appeared at other festivals including Harry Brown’s Greenlove Festival, the Wormtown Music Festival, Harry's Harvest Ball, Uphoria Music Festival, and others.