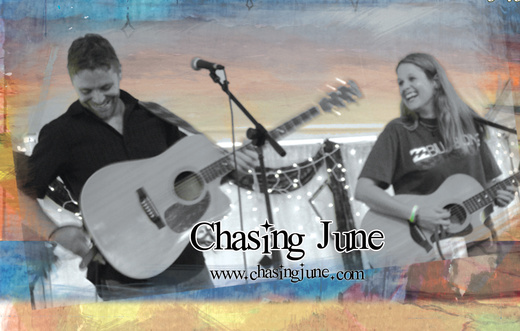 “Many times I see “new” artists who seem s as though they are forcing something about their performance...they often seem like they are trying to follow a pattern and end up hiding their true talents.  Watching Chasing June, I saw two performers who enjoy making music, and whose talents are evident and highly original.   There was joy on the stage, and it was infectious among the audience who were enjoying the great music.  I can't wait to hear more!”
-Ron Olesko “Traditions” WFDU
& “The Village” Sirius Satellite Radi

Hailing from the northwest region of NJ, Judy and Steve first met in the summer of 2009 when Judy was holding court on stage at Lake Mohawk’s famous brewpub Kroghs.  Steve drifted over to have a listen, and in about 1-2 minutes, he knew he might have found a writing partner, who could sing her heart out and command her guitar.  Judy and Steve liked the idea of a co-writing duo and quickly went to work as Chasing June.

Beginning in the winter of 2009 through today, Judy and Steve released  an EP (Aug. ‘10), their debut album, “Under the Slate Grey Sky” (Jan.  ‘11) and have been involved with other writing projects including their contribution to the local NPR radio station’s (WNTI 91.9 FM) Christmas album.  The original song “I’m coming home to you” was was part of the compilation that also included songs by Ellis Paul, Gandalf Murphy and the Voodudes.

“…Steve and Judy really are pro's at entertaining, and their music makes you happy to be alive… You can't help but want to join in, singing along, tapping your feet, or hugging your date or almost anyone in the crowd that a few hours ago might have been a complete stranger. If you give them a listen, and I hope it's sooner than later, Chasing June will capture your heart like it has mine.
Bill Child, Fan Post on Facebook