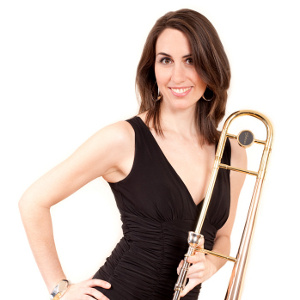 Vocalist, trombonist, and songwriter elizabeth! is a fun and interactive performer and educator who connects with audiences through the thrill of improvisation and personal, accessible musical stories. Like Nat “King” Cole and Ella Fitzgerald before her, she’s a playful storyteller with a twinkle in her eye that comes through in her music. In her jazzy pop tunes inspired by travels around the world, elizabeth! also harnesses the power of pregnant moments, carefully phrasing her vocals to give each word its own special place.

Her new album, Brainchildren (November 2011 on Canopy Jazz), tells stories real and imagined, outlining the similarities found in our experiences no matter where we reside. “Three” tells the story of a couple deciding to have a child, “Bicycle” reminds a child to enjoy his innocence while it lasts, and “Melting Snow” describes the feeling of rebirth after tragedy. Several songs relate tales of love gained or lost, and the album is rounded out with instrumentals inspired by insomnia, tacos, and a skipping stroll in Memphis. Recorded in Brooklyn with her working band in a single day, Brainchildren features Jason Domnarski on piano, Rob Jost (Saturday Night Live, Bjork) on bass and Robert Di Pietro(Norah Jones, Josh Rouse) on drums. Special guests include Kiku Collins (Beyonce), Jon Natchez (Beirut), and Mark Erelli (Josh Ritter).

Honing her craft since the age of seven, elizabeth! has studied piano, trombone, and voice as well as arranging and composition. She played in the jazz band while studying neuroscience at Harvard, and has a Master’s Degree in jazz from New York City’s Queens College, but her initial love of music came from her parents in rural Vermont. “My dad is a musician, so I grew up listening to live jazz – going backstage, lugging gear, learning the ins and outs,” she said. “And my mom had great taste, playing Motown and folk music at home.” This combination of musical genres can be heard in the music elizabeth! plays today, and in the way she approaches performance: lyrical like a pop song, but with a background twist of jazz. Counting Sheila Jordan and Phil Wilson as influential teachers, elizabeth! also admits to loving Whitney Houston.

Also a dynamic teacher and clinician, elizabeth! believes everyone can be musical. Using improvisation as a guiding tool, she works with students of all ages, building confidence and developing imagination. She teaches in various situations, from one-on-one performance coaching, to workshops for fifth graders on improvisation in daily life, to lecturing 800 rowdy inner city high school students. She also directs the summer Vermont Governor’s Institute on the Arts.

Following up on her 2008 release hot & silver – of which The Palo Alto Daily News said “her silky, sultry, elegant vocals enliven standards” – elizabeth! will tour the East and West Coast this fall in support of Brainchildren.