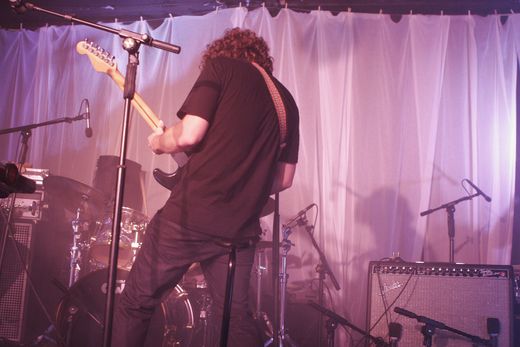 Javier Villar, aka El Tarot, was born in Puerto Rico and has lived in Colombia, Mexico City, New York, Philadelphia, London, San Francisco and San Juan. He began his career as a songwriter with major label act Lapilázuli in Bogotá on 1999. The very next year went on to form his own independent record label ítoko Records. On 2004 he appeared as a vocalist and guitarist in the album Piedra with the Latin funk orchestra La rueda de la fortuna. Numerous releases and recordings under the ítoko label followed. Some of these titles are available via the internet through CD Baby, most notably Alexandra’s Sentir (2007). On August 2009, he accompanied Alexandra live with the Spanish classical guitar, as nominees for best Latin Album at the Just Plain Folks Awards in Nashville

In April, 2009 El Tarot notably participated in the grand event Zaramama, organized by Mujeres Ayudando Madres and Vanessa Caldari of Puerto Rico. The concert introduced him to the artistic community of the Island

Besides being a songwriter, El Tarot is also a frequent performer and often works as a live musician for local Puerto Rican theater troupes, such as Ágora Teatro and Artefacto. On 2009 he appeared in versions of Oscar Wilde’s Salome and Nikolai Gogol’s The Inspector, playing guitar, the synthesizer, percussion, plus original music, programming and sound effects. Excerpts of El Tarot’s rendition of Shakespeare’s A Mid Summer Night’s Dream can viewed at the following link: http://www.youtube.com/eltarot

“Sin Bling Bling”, his solo debut as a recording artist, is a Dance Hall Caribbean Electronic beat which has already captivated audiences throughout the island of Puerto Rico. El Tarot performed the song on April, 2010 at the grand concert organized by WAPA América / TV and Juventud Vibra. The event took place at one of the island’s main concert venues, the Roberto Clemente Coliseum. On September, 2010 he was also invited to appear on the national cultural variety show “Cultura Viva”, a nationally syndicated show on TU/TV where the most important talents of Puerto Rico have at one time or other appeared.