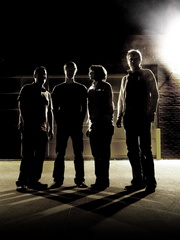 1000 Miles From Home is a band full of paradoxes. Formed in 2006 as an outlet for Zac Carrington's songwriting, the band has spent the past two years writing, recording, and regionally touring. Sort of a "geek rock" band, but without the goofy lyrics, their songs are deeply emotional while the music is often upbeat. "We try not to take ourselves too seriously, while at the same time being sort of being serious." The group puts on an energetic live show that is embraced by young audiences and strangely their parents too. The members of 1000 Miles From Home have shared the stage with national acts such as Gym Class Heroes, Bowling for Soup, and Less Than Jake.

While heavily influenced by the mid 90's emo and alternative scenes including bands such as Jimmy Eat World, Mineral, Sunny Day Real Estate, Hum, Smashing Pumpkins, Jeff Buckley, and Texas is the Reason, the band's sound is unique. Modern comparisons of their music include Incubus, the Foo Fighters, Saosin, and Jimmy Eat World.

The 2007 EP release Collusion was well received in the college radio market, garnering CMJ Charting positions all over the country. Their single "Explain the Explanation" was picked up by 102.1 The Edge in Dallas and also serves as the theme music for the nationally syndicated independent music radio show, The Colorado Wave. "When You Go" is featured in the Fall 2008 Compilation by LBM Music Zine distributed to Hot Topic stores nationwide.

A self-released new record is in the works for 2009, to be released as a series of singles directly as digital downloads to iTunes, Amazon and other online music retailers.