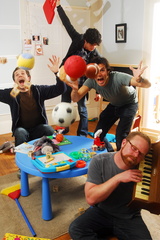 For five years, Audio Out Send has been wrapping ethereal strokes of space pop around the ears of San Francisco Bay Area enthusiasts. They are both a powerful and unassuming band, as eager to play San Francisco’s premier rock venues as they are to set up in the cozy confines of East Bay cafes for intimate, mind-blowing shows. Their 2003 debut, …or Does It Explode?, was a striking introduction and their 2005 EP, A Broad Connection, was a short but impressive stopgap release in between full-lengths. With the release of Sharpen the Hours, Audio Out Send has positioned themselves as one of the most important groups in the area. The album is an excellent collection of well-rendered songs and an honest representation of an impressive live band. Musically speaking, Sharpen the Hours strikes a balance between the glacial movements of the Radar Bros. and the lush pop of Rogue Wave. Specifically, the band is more precise – constructing clear and well-paced song structures where the Radar Bros would be abstract and edgier – with overdriven guitars and powerhouse drums – where Rogue Wave would settle for the innocuous. In a song like “Mission of the Week”, which methodically builds to noisy a climax, there’s even a hint of contemporary Radiohead. Acoustic guitar strums are plentiful and echoing keyboards crawl into every corner of this mix. Singer/guitarist, Ben Jennings’ voice guides us through the band’s carefully arranged soundscapes, striking up memorable melodies. For a band that has been so good for so long it’s not surprising that this, their second full-length, is one of the best albums of the year but rather that they’ve kept such a low national profile. Perhaps with Sharpen the Hours they’ll get a little more attention but whether they do or they don’t it won’t change the fact that this record is downright awesome. - Andre Perry (Staff Writer, Cokemachineglow / Columnist, Crawdaddy! / Contributor, PopMatters and Daytrotter)

Review For A Broad Connection by SCTAS
“Audio Out Send have mixed all that was good from their first release with more experimentation and fine-tuning, producing a record with many different layers and textures of sound that will engage...
The Bay Area, Pt. 1 by Coke Machine Glow
These four lads have quietly shifted their weight around the Bay Area scene for five or six years, emerging periodically to drop an album or an EP on us. To wit: After releasing 2003’s …Or Does It...
Bandwidth: Audio Out Send by San Francisco Chronicle
There's a reason the self-described "dark but optimistic" dudes in Oakland's Audio Out Send have been making music together in various forms for nearly a decade. They learned to share. "We shared...
Review For Sharpen The Hours by Quickcrit
I've been casually following this Bay Area band for a while and have always enjoyed listening to their new material, but this is the first album that I've been able to get exited about - the music...
Broad Connection Review by San Francisco Bay Guardian
“Tick-tock, soft vocals, and tender moments. Sigh. Summer's nearly over, but the lazy mood persists on Bay Area group Audio Out Send's new EP, A Broad Connection. Beats click like crickets....
The Bay Bridged Episode 92 by The Bay Bridged
This week, we bring you the music of Audio Out Send, an Oakland quartet who have developed a textured sound mixing strong rock influences with synthy, sometimes psychedelic flourishes. The band’s...
Broad Connection Review by Splendid Ezine
“Calling Audio Out Send's music lush is like calling a tree green -- it's the most obvious hook, but there's much more to explore. The group draws as much from psych-popsters like Mercury Rev and...
p
A
n
E
F
Song Title by Artist Name
987654d
LM
iAnEAqqqq