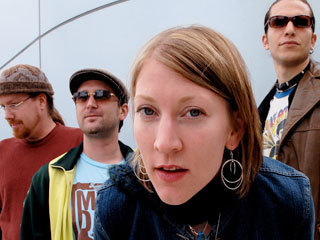 OHN is a band that defies categorization; an interesting amalgam of diverse artists and genres that converge so seamlessly and well that you can easily convince yourself that they are together, playing, rehearsing, and recording 24/7.

They are not—although they do rehearse more before a live performance—but their ability to find the same sonic groove is no accident. Each of the members brings an impressive musical pedigree to the stage and studio and, more importantly, an attitude that pushing the boundaries outward and upward is good.

Founding father, programmer and producer, Bill “Bildeaux” Sarver, has worked on material for talented artists such as Jarboe from the Swans, Riggs from Rob Zombie, Soak (Interscope/Sire) and Laura Scarborough. Chris Forshage (guitar, horn) has played with many acts including Larry and Grass. Andrew Tachovsky is a guitar veteran, previously sharing stages with Chris in the band Pura Vida. Brad Houser (bass, sax) is a veteran of several top bands such as Critter's Buggin (Ropeadope), The New Bohemians (Geffen), and Lila's Medicine. The most recent addition is Allison Scharf, who provides sensual vocals that mix perfectly with the sultry downtempo sounds.

OHN’s material, featured on 2004’s Let’s Get It… and a 2005 release, In The End, All Things Begin, starts with Bildeaux generating rhythm tracks with a bass line and maybe a keyboard part or two. Members of the group then come in to lay down their parts, then Bildeaux edits, chops, samples and creates parts out of the various performances, and an OHN track is created.

It’s a process that has some techno-structure, but it is not devoid of soul. OHN brings energy and emotion to their live performances, with artists riffing on the basic structure of the songs.

“This is not an outfit that produces sterile ‘electronica’ and barely notices the audience,” wrote Marsha Mann in Insite Magazine. “These people know how to get it on for a live show."

For vocalist Scharf, involvement in OHN opened a new musical channel. “I played in an alt-rock band for several years, and I felt like I was constantly battling to be heard over the drums and distortion,” she says. “With electronica, I feel like I can utilize my voice in more ways: I can try for breathy, husky, soft, more aggressive, lower notes, higher notes.....whatever I think suits the song.”

As you’d expect, the musical influences that flavor OHN’s work are stunningly diverse, yet the band members are on the same page when it comes to applying it to their recording and performances. Sarver sums it up: “I am constantly listening to music of all genre types. I often hear old tunes and say "man, we gotta try that". I approach each track as an experiment to see if I can push my abilities and the musicians I work with to achieve something we have not accomplished before. That constant demand for something new is what keeps things exciting for me.”

OHN’s fans know that any given album—or track—can be different from the last; an OHN album often covers many genres of music. “We’re always looking to experiment and push our musical abilities as far as we can,” Sarver says.

BeatPick Beat of the Week by Beatpick
Thought-provoking, genre-crossing Pop-Rock laboratory OHN are at the moment working hard on promoting their latest album “Revolutionary Revolution“, certainly the most mature piece of work the...
Collected Sounds by Collected Sounds Magazine
a Review by Amy Lotsberg Producer of Collected SoundsDowntempo is a term that's been kicked around a lot and I guess that's what you'd call these guys. Though there are some really bouncy songs as...
Insite Magazine Feature Article by Insite Magazine
OHN - Revolutionary RevolutionAn outstanding follow-up to their 2005 release In the End, All Things Begin. Austin’s OHN consistently produces rich, melodic, sensual and sometimes intense,...
91.7 KOOP Around the Town Sounds by 91.7 KOOP Around the Town Soun
OHN and Austin Unsigned - details from 3/29/2007 show02. OHN / "Be with Me" / Austin Unsigned (multi-artist compilation), or Revolutionary Revolution (Ohn's new CD)The band:OHN is one of my...
Austin 360 by Austin 360
Ohn CD release at the Karma Lounge. I first stumbled across an Ohn CD a couple years back when I first started doing a show on KOOP radio. It was cool but a little too electronic for me. I...
101.5 Chillville Catch of the Day by 101.5 Chillville Catch of the
101x Chillville made us the "Catch of the Day" for Jan 21st. Big thanks to Jason and Ray Dog for the support. Be sure to tune into Chillville Sundays from 9 to noon on 101.5 in Austin TX. I, Full...
Music Reviewer by Music Reviewer
OHN is full of edge, modern flare, and a remarkable sense of confidence which commands the respect of all listeners. The strong, fast, and energized instrumentals are softened by the female vocals...
Beatpick by Beatpick
Calling on all synthesizers, break beats, trumpet, saxophone, electronic, jazz and down-tempo lovers, OHN has sparked an electronic revolution! OHN is an Austin, Texas based band thriving in the...
Austin Monthly Magazine by Austinb Monthly Magazine
By Ward LoweStraight from the Studio June 2007 Issue Many people hear the word "electronica" and think soulless, machine-made music- not so with OHN. The band's talent, plus founder/producer Bill...
Albuquerque Tribune by Albuquerque Tribune
This electro-jazz-funk-World beat quintet from Austin layers its sound over electronic rhythms, with samples, loops and techno beats. And it occasionally throws in cello, sax and trumpet for good...