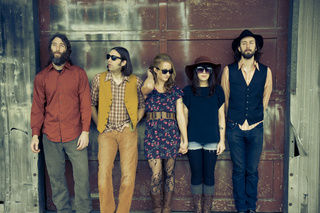 Buffalo Clover is a rare plant that grows in the wake of stampeding buffalo. It is also the name of Nashville's most eclectic band. Fronted by songstress, Margo Price, the group draws inspiration from true roots music. Price and her husband/co-writer, Jeremy Ivey, formed the band after meeting in Nashville in 2007. Joined by the talents and songs of Matt Gardner, their styles range from underdog gypsy punk to Motown boxcar blues, vaudevillian acid rock to train wreck folk. Their songs are a unique blend of carnival dirges, quirky waltzes and nursery rhymes. Roots music isn’t synonymous with the stripped down sounds of Pete Seeger or Woody Guthrie though those two are widely credited as the fathers of American roots music. In fact, the genre’s massive legacy includes bluegrass, jazz, gospel, country, even vaudeville. Hailing from Nashville, Buffalo Clover takes this wide-angle view of roots, fearlessly stitching together blues, rock, country, folk and gypsy music into an eclectic, theatrical tapestry. Ladies and gentleman, if you’re looking for a new spin on old time music, step right up and enjoy the show." -Kate B., Ourstage Blog -Nov. 27th, 2009

God is in the tv by Tiffany Daniels, The Drunken Wherewolf
My final recommendation is awarded to a three-person collective from Nashville, Tennessee. For the purpose of this article; Buffalo Clover is fronted by the serene and homely Margo Price, who...
Blood on The Bluegrass by Rebecca seung
If you were stumbling through the dry, dusty midwest, lost and hopeless of finding refuge, Buffalo Clover would be the teasing siren, beckoning to you to come join in their merriment, leaving a...
Roots Music by Kate B., Ourstage Blog
Buffalo Clover is a rare plant that grows in the wake of stampeding buffalo. It is also the name of Nashville's most eclectic band. Fronted by songstress, Margo Price, the group draws inspiration...
p
A
n
E
F
Song Title by Artist Name
987654d
LM
iAnEAqqqq