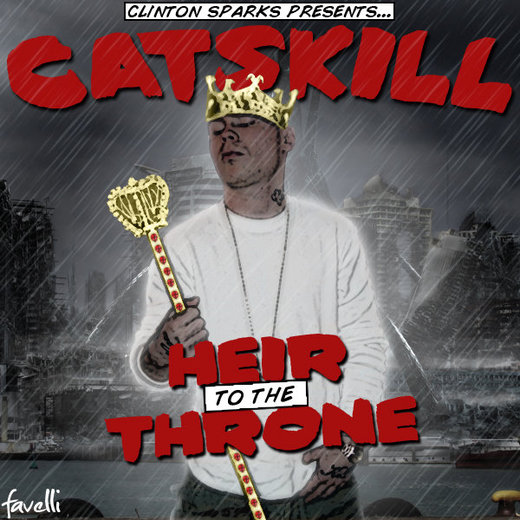 Cat Skill is a hip-hop artist from Winnipeg, Manitoba whose singles “U Must B Lame,” “Weekend Get Down,” Winna Pegga,” and “I Love That” featuring Moka Only, are played regularly on Streetz 104.7 FM. His song Winna Pegga has earned a prestigious spot playing at the MTS Center during Winnipeg Jets home games.

Cat Skill shot a music video for “U Must B Lame” in Toronto during the week of NXNE, Cat Skill’s music has already earned him some industry attention.

In 2008, E! entertainment music correspondent and DJ/Host of the #1 rated worldwide satellite radio show, Smash Time Radio, DJ Clinton Sparks discovered Cat Skill’s song “Sugar Town” on the Internet. Sparks, also a multi-platinum producer and songwriter who has worked with Lady Gaga, Akon, Rick Ross, The Game and Notorious BIG, loved the song so much that he contacted Cat Skill through myspace, and ended up hosting Cat Skill’s album / mixtape ‘’Heir To The Throne’’ featuring Bizarre of D12, Moka Only, Natsla and Clinton Sparks. The result was one of the most original hip-hop albums of all time. The content, ideas and storytelling techniques were a great showcase of the up-and-coming artists budding talent.

Catskill’s song “Sugar Town,” and his controversial single ‘‘U Must B Lame,’’ were both nominated for awards in the 2010 International Songwriting Competition. In the competition, which gets on average over 15, 000 submissions, Cat Skill made it to the comedy semi-finals for “Sugar Town,” and into the hip-hop semi-finals for an early incarnation of “U Must B Lame,” called “Kanye.”

A self-proclaimed (or confessed) lyrical madman, Catskill is highly-ranked on superstar Akon’s hitlab.com. He has charted 10 of the top 100 analyzed songs on the website – indicating Billboard chart potential. Akon has personally listened to Cat Skill’s music and says there is a market for it. Of over 2430 hip hop artists, Cat Skill is ranked 5th all-time in the hip hop category on hitlab.com. In December of 2011 Cat Skill was offered a contract by Pierre Gauthier, owner of hitlab.com, to distribute a new Cat Skill project.

‘‘U Must B Lame’’ also caught the ears of popular Hip Hop website Allhiphop.com, which featured the track in its most popularly visited column. Explicitly condemning many of the evils of the industry, it may well seem, at face value, one of the most inappropriate and offensive tracks of 2010. A closer listening reveals that it is extremely well-written, fearless, and expertly aggressive in its composition and delivery.

Thanks to his outspoken and off-the-wall approach, coupled with his seemingly effortless lyrical abilities, Catskill is steadily gaining momentum and recognition as one of the premier, all-round Canadian artists in the industry. His complex style borrows from hip-hop’s greats – combining dark humor with topics varying from pop-culture to his own life experiences. While often highly personal, Cat Skill’s complex lyrical abilities, and highly developed delivery, allow him to speak to a wide audience, without trying to speak for, or as them.

Evoking a wide range of influences from Wu Tang, Eminem, and even Guns and Roses, Cat Skill has created a unique style; it is comedic, futuristic, dark, pop, Top 40, energetic and revolutionary. Having already caught the eyes and ears of industry professionals such as Akon, Angela Yee, and Clinton Sparks, the talented emcee and lyricist is, above all, positive and ambitious. Cat Skill is actively searching for the right opportunity to take his promising career to the next level, and is well-prepared to meet the high demands of creating and promoting a new, full-length album.

Cat Skill’s first album “Heir To The Throne” manifested one of the world’s largest DJ’s to contact him. In a world where artists normally pay for cosigns, this is a rare occurrence. His follow-up album, “Little King,” the definition of his real name, Ryan, promises to be an even more ambitious undertaking than the last. While very proud of his previous work, he is hoping to expand into new horizons on “Heir To The Throne” to finally sit atop it, and claim his spot in hip-hop history.