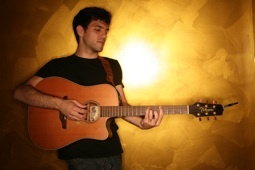 Christopher James is a twenty-two year old singer/songwriter from Litchfield, NH. Growing up on all genres of music, Chris began to develop a real appreciation for the art towards the end of high school. It was then that his father gave him his first acoustic guitar and followed up by teaching him the basics. Chris took to the instrument rather quickly, and taught himself how to create beautiful sounds with his new found love. Writing his first song in his senior year, Christopher bashfully played for any audience he could find. As his skills developed, so did his confidence.

In the summer of 2006, Chris made the move to Brookline, MA to put himself in the thick of Boston where the music scene is more prominent. It was there and then that Chris’ personal style really began to shine through. Playing at various open mikes in Boston earned him enough credibility to start playing some more serious shows at colleges, universities, and a host of other venues.

Within the past year, Christopher James has furthered his exploration of his musical talents by expanding his instrument selection. He has begun teaching himself in the ways of the mountain dulcimer while also working on the electric guitar.

With an arsenal of well versed lyrics and a well rounded style, Chris now has a loyal and increasingly large following that continues to grow every day.