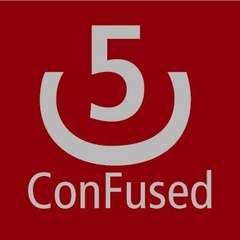 ConFused5 is a perfect example of the twenty year cycle in Pop music. First formed in 1981, the band, then known as Frust, reunited in 2003 as Confused5 to record their debut album Out Of Confusion as the 16th band to raise $50,000 on the internet label Sellaband.com. Ever true to their vintage roots, the guitar-driven Austrian rock quintet turns back the hands of time on “Because Of You” and the anthemic “Puppet Of The World”. Keyboardist Herbert Hopfgartner and Bassist Kurt Breidler deliver classic vocal performances while guitarists Markus Melms and Alexander Kranabetter prove that nothing compares to the real thing. Their harmonic guitars in “Out Of Confusion” and “Deep Under” are searing and full of attitude. Kranabetter’s crunchy Les Paul rhythm tracks and Melms’ singing solos are driven to full throttle by exciting veteran drummer, Beda Bachmayer. Produced by Pete Strobl, Out Of Confusion was recorded at Sonic Flow Studio in Salzburg, mixed by Ron Hitchcock and Strobl in Los Angeles and mastered at Bernie Becker Mastering. From the deep and nasty groove of the title cut, and the funky “Why Me”, to the jazzy blues of “New Orleans Minor”, ConFused5’s Out Of Confusion is catchy yet musically complex, mature but full of youthful exuberance, and in the best rock tradition, best when enjoyed at a healthy volume.

Classic Rock Society by
This album has been made with money invested via the Sellaband website, where punters can invest money in the making of an album in return for a copy of the finished product and a share of the...
Amplified by
This quintet comes from Austria, and were previously known as Frust, and I've never heard of them either, their debut album following a reunion in 2003 raised $ 50,000 on the www.sellaband.com...
Firestorm Radio by
This band brings the classic rock sound back, and makes it sound fresh and new again. Very melodic tunes from the vocal parts, to the guitar and keyboard parts, and a classic rock bass driving this...
Strutter Magazin by
The album "Out of confusion" is now released and featuring 10 tracks, which musically is a sort of a mix of Classic Rock, Progrock and AOR/Pomprock, sorta SAGA meets BLUE OYSTER CULT and STYX, yet...
p
A
n
E
F
Song Title by Artist Name
987654d
LM
iAnEAqqqq