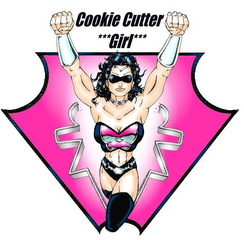 Julian is Cookie Cutter Girl, a 21st Century Pop Superhero packing "Girl Power POP" with a punch! CCG is freeing women everywhere from the "mold" in which society holds them captive. "Are *you* a 'cookie cutter' girl... or did you break the mold?" A one-of-a-kind force to be reckoned with, CCG is breaking the mold of the female pop star on 500+ TV & RADIO STATIONS and 30+ CDs Internationally. "Nashville's version of Fiona Apple" Rolling Stone. Cookie Cutter Girl is a real life, modern day Cinderella Story, updated with an Afterlife Advisor, a Magic Guitar and Perky Pets! This is the TRUE STORY of Julian, a young woman in crisis, who discovers her own inner strength ... and a Superhero alter ego too: Cookie Cutter Girl! She gathers the strength, or GIRL POWER, within every woman she helps, in the form of PINK ENERGY RAYS, shooting them at her enemies to fight the injustices of the world. Julian co-wrote issue #1 of the comic book with the "Queen of licensed children's books," Justine Fontes (DISNEY, DREAMWORK) and it will be produced by Sonic Comics' Ron Fontes, the ex-Art Director for Marvel Comics. Julian layers GIRL POWER LYRICS over POWER POP MELODIES "that will be STUCK IN YOUR HEAD for hours," CDBaby.com. Girl Power POP with a PUNCH delivered by a Female Empowerment Icon. These are true tales delivered by a shy singer/songwriter turned GIRL POWER GODDESS. "PowerPuff Girls Meet KISS at CBGBs!" Pat Horgan Talent. Go to CookieCutterGirl.com today and hear what everyone is buzzing about. Go to CookieCutterGirl.com today and hear what everyone is buzzing about. Lynn 'JULIAN' is also an award winning "GIRL POWER POP" singer/songwriter. ("Get The Picture" was TOP 10 in the "POP" catagory of the BILLBOARD SONG CONTEST.) Hire her today for music to motivate you! As a multiple song contest winner with a degree in Jazz & Contemporary Music, Julian has released her own CDs, and written for other performers, placing her songs on 30+ CDs internationally. Cookie Cutter Girl" is her Super Hero alter ego. Girl Power Society" is her International Girl Power Movement. BE A HERO" is her daily Girl Power & Music BLOG and her monthly Girl Power & Music newsletter. Pop Superhero" is her Girl Power Pop band. Artist: Lynn 'JULIAN' Alter Ego: Cookie Cutter Girl Website: CookieCutterGirl.com Title of CD: “Cookie Cutter Girl” Style of Music: Power POP with a PUNCH! Mission: Guitar ROCK with GIRL POWER! Label: Cookie Cutter Records (Self Produced) Publisher: Cookie Cutter Publishing (Self Produced) Manager: Frank Douglas Addresses: Boston, MA