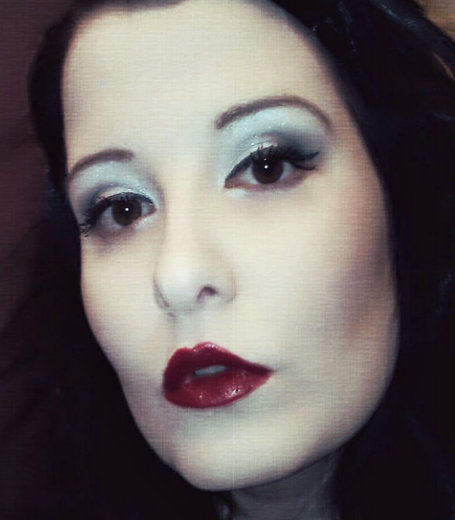 Crystal Sunshine’s name sounds like she’s the next trendy Pop artist, but she’s not that at all. She’s quite a character—a self-proclaimed “weirdo,” but more importantly, a creative woman with a sound that can only be described as “happily dark,” and it’s completely genuine. She has a luminous voice backed by ominous background music (in which she plays the pi

ano and strings), which results in a
spiritual sound. Calling it “good” is greatly understating it. It convinces those tuning that they’re in store for a bad trip, which instead turns out to be refreshing and revitalizing. Nephilims are the offspring of humans and angels as mentioned in the Bible, so her title refers to a being that transcends the living and the dead. Sunshine’s music is the kind that softly takes listeners to a foreign dimension, while still maintaining a radiance that is difficult to explain to those who have never heard her. It is worth mentioning that she deserves a listen, for the experience alone. One may feel enlightened. Like Patti Smith meets Jewel in a cave and they share a botttle of wine and exchange stories. Track 1: “Nephilim Blood” showcases Sunshine’s ability to lure in listeners with her singing and it helps that she has the most appropriate and best-suited musical accompaniment. The arrangement is flawless. Track 2: “Love is a Tomb” exemplifies Sunshine’s lyrical prowess which at times is hidden by her voice in such a way that it doesn’t matter what she’s singing about—it just sounds good, hands down. Sunshine tends to give her voice a personality of its own and in this case it’s forlorn and strong at the same time. Very impressive. Track 3: “Road Kill” is a metaphor for how one feels when a lover has an air of superiority, and Sunshine is dead-on (no pun intended) with her explanation. She takes a simple piano track backed by eerie organs, and gives it depth with her magnificent lyrics. Track 6: “Sweet Goodbye” is appropriately titled, because it is the softest, most angelic offering here. High-octaved piano keys mixed with heavenly strings and Sunshine’s brightest performance convey a lovely message: “As we live to die…nothing like a sweet goodbye.” Reviewed by Reggie Altema at Bryan Farrish Radio Promotion

Piano or keyboard will do just fine. Also a microphone and a P.A. would help :) I don't need much to sound amazing.

NTERVIEW WITH A GLAMPIRE: Crystal Sunshine by
Her eyes are penetrating. When you look into them they have a crystal-like quality to them. They are loving, soothing and dark all at once. Her porcelain-esque skin adds a near gothic quality to...
ArtChix Magazine Artist of the Year by
The music of Crystal Sunshine is artistic intercourse. It is an experience both sensual and spiritual, tapping the heart and soul of the listener and opening the door to a new realm where we feel...
CRYSTAL SUNSHINE Nephilim Blood review by
A REVIEW by Samireh Samadi Singer Crystal Sunshine is influencing an inter-generational demographic with her album ‘Nephilim Blood’. This unbelievable album from Showtime Records features songs...
CRYSTAL SUNSHINE INTERVIEW by:music equalz orgasm by
the first time I heard crystal sunshine I felt like I had heard something amazing and special.mostly because I just had.her gothic tinged jazzy music is unlike anything I had ever heard then, and...
p
A
n
E
F
Song Title by Artist Name
987654d
LM
iAnEAqqqq