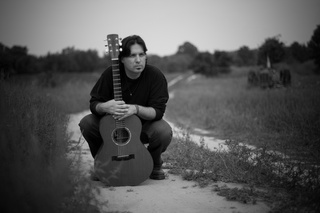 Drew Nelson’s songs are facile in poetry, tactile in tone. They’re simple, direct expressions via mere melody and a mittful of guitar chords. Such is Drew’s gift – the ability to extract spirit and soul from the jumble of modern life, and turn it into music. His first full-length album, “Immigrant Son,” doesn’t convey a black-and-white world of joy and anger, but rather, a colorful mélange of complex emotions expressed in blues, grays, greens and browns. “Immigrant Son” is the culmination of Drew’s unique artistic efforts, a balance of his worldliness and small-town-America sensibilities. As a kid, he quietly rebelled against the strict, religious confines of his home by secretly listening to rock radio. He overcame his band teacher’s humbling criticism of his drumming skills by teaching himself to play guitar. He escaped the quiet quaintness of his modest, conservative West Michigan hometown by joining the Navy and traveling to far corners of the world with his guitar on his back. His itinerant lifestyle filled his notebook with ideas, and upon returning home, he found his voice in the small struggles and triumphs of daily life. Drew shared his passion with audiences in clubs and coffeehouses, and released debut EP “Recovering Angels” in 2001. His songs made a mark in his home state, attracting listeners with his word paintings, his humble insights, his unpretentious singing, his thoughtful strumming, and, most importantly, his honesty. Drew’s focus and dedication to his art brought him to Alaska, through Texas, to the Kerrville Folk Festival, to 18,000 fans at the Muskegon Summer Celebration (opening for Melissa Etheridge), to the recognition of the New Folk Contest for Emerging Songwriters, where he was a finalist. And now, to “Immigrant Son,” the product of two years of writing and three weeks in the studio with longtime friend and noted West Michigan producer and engineer Michael Crittenden. Although embellished by colorful instrumental textures (including fiddle, mandolin, tin whistle and, yes, a jangly cat toy), the record adheres to Drew’s man-with-a-guitar ethic. That sensibility guided the arrangements, from the blast of flowery fresh air that is opening track “Lovely Day,” through the boggy blues of “Wal-Mart v2.0,” the roots-shuffle of “Brand New Way” and a plaintive cover of Richard Shindell’s road song “Next Best Western.” The homespun heartache of “Breathe” and the gritty urbanite observations of “Wealthy St.” are thoughtful portraits, key developments in his evolution as a songwriter and storyteller. It’s rare to hear songs which cut through the noisy, distracting chaff of the day – and therein lays the promise of “Immigrant Son.” “The need for love, hope and acceptance are all interwoven into the fabric of our humanity,” Drew explains. “I want to touch that secret place in my songs.” *Kerrville Folk Festival performer Thredgill Stage 2003 *Finalist in the Kerrville Folk Festival New Folk Contest for Emerging Songwriters, 2004 *Falcon Ridge Folk Festival Emerging Artist, 2006 *Telluride Troubador Contest - Honorable Mention, 2006 *Kerrville Folk Festival 2007 in the round with Susan Warner and John Gorka. *Has performed with the likes of Peter Mulvey, Edwin McCain, Alice Peacock, Jeffrey Gaines, Angie Aparo, Melissa Etheridge, Dana Cooper, Caroline Aiken Tom Prasada-Rao, Claudia Schmidt, Kitty Donahue, Josh White Jr.David Mead, Mustards Retreat, Darden Smith, John McVey and The Kennedys. *Venues and Festivals 2006: The Ark, Wheatland Music Festival, Bliss Fest Concert Series, Falcon Ridge Folk Festival, Connections Festival, Trinity House Theatre, Porcupine Mountains Music Festival, TriCentric Showcase Artist NERFA. (North East Folk Alliance) for Booking Contact drew 616.706.2539 email: drew@drewnelson.net In the UK contact the Grapdvine Agency bob@grapevinemusicagency.co.uk Instrumentation Drew Nelson Singer/Songwriter Acoustic Guitar and Vocal Discography 2000 - WGRD's RadioActiveV Compilation CD 2001 - Recovering Angels Ep 2002- Winter in West Michigan Compilation CD 2003 - Standing Together Compilation CD 2005 - Immigrant Son Links http://www.drewnelson.net

I am an immigrant son. by Grand Rapids Press
I am an immigrant son.With little more than the clothes on their backs, my Latvian parents arrived in the United States after World War II to forge a new life, start a new family and adopt a new...
Immigrant Son UK Review by Wisperin' and Hollerin UK
Drew Nelson: Immigrant Son (Mackinaw Harvest Music MHM021)This is a cracker of a debut album from Drew Nelson, so accomplished it speaks of years of work building to this point of getting himself...
Bare Bones of Original Folk Music by Grand Rapids magazine
Singer/songwriter Drew Nelson doesn't have a press secretary. Even if he did, he could not have orchestrated a better backdrop for a discussion of his latest CD, "Immigrant Son," than Gaia Cafe'....
p
A
n
E
F
Song Title by Artist Name
987654d
LM
iAnEAqqqq