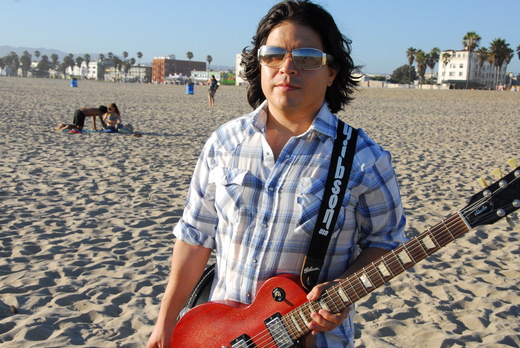 David Martinez, singer/songwriter, who is currently the #1 Alternative artist in Corpus Christi, Texas, will be releasing his greatly anticipated new EP ‘One More Time’ on Dec. 11, produced by the acclaimed Leroy Miller of CA.

Music started at a young age for David, who was influenced by his father, a multi-instrumentalist. Early influences were Grand Funk Railroad, Kiss, Steve Miller Band, and Led Zeppelin, which led David into trying his hand at songwriting on his first guitar. During his early college years, David recorded his first demos in a studio put together by friend Robert Davis. With encouragement from friends Eduardo Garza and David Navertte, he ventured into the local music scene sharing his songs at area open mic nights while continuing his education.

After grad school, David assembled his demos and songs, and in 2005, discussed touring with local musician Jimmy Wilden. Together, they formulated a tour plan, and in 2006, along with Hope Cassidy, played a string of shows ranging from Houston, San Marcos, and Dallas, TX out to Albuquerque, NM, Tucson, AZ. They then headed to CA to play Pacific Beach (San Diego), West Hollywood, San Francisco. Heading north, they hit Seattle, WA, then over to St. Paul, MN, Janesville, WI, and returned to a great homecoming in Corpus Christi.

The LA experience proved fruitful for David, as that was where the musical fusion with famed producer Leroy Miller began. After a lunch meeting at Jerry’s Famous Deli, Leroy agreed to listen to David’s demo.  David’s music sparked interest and the two began to discuss ideas about recording. In 2007, David was invited to Leroy Miller’s Hollywood studio and ‘Can’t Find You’ and ‘Where Could I Go’ were recorded with Kane McGee (Drums), Cha Chi (Percussion), Leroy Miller, and Adam Macdougal (keys) from The Black Crowes. David also did a live set in Santa Barbara with Claude Hopper at Cold Stone Tavern.

In 2008, the David Martinez Band was formed, consisting of David (Acoustic Guitar/Lead Vocals), Johnny Ramos Jr. (Drums/Percussion), Joseph Flores (Lead Guitar), and Johnny Mitchell (Bass), releasing an EP in 2009. Sponsored by AXE, they opened for Bob Schneider, and then showed great promise at KLRU in Austin, TX in a National Battle of The Bands filmed by the Austin City Limits crew and sponsored by Land Shark Lager, Rhapsody Music, and Sonicbids.

In 2010, the David Martinez Band had quite a year, and performed the first gig during SXSW in Austin which included Keaton Simons joining in for a set. In July, they embarked on an acoustic tour of CA, hitting San Diego, Los Angeles, and Santa Barbara. On July 18th, they played at the legendary Viper Room in in West Hollywood. David flew out to Nashville to work with Leroy Miller yet again, recording ‘Hey Mary’, released in December of that year.

2011 brought a rush of activity for David, playing in the Cincinnati area in March in collaboration with Indie On Air acts including Danika Holmes and Lovebettie. SXSW was again on tap, this time with Indie On Air and Planet LA acts, including a series of shows during the conference. David was then chosen to play a showcase in Austin, Texas in May. In July, he appeared in Lake George, New York; and in October, played in Seattle and Tacoma with Match1Entertainment. November brought a gig – opening for Danika Holmes for her CD release and another show with Jason Jeka of Fivestar Deluxe.

For the third year in a row, David played a series of shows at SXSW in 2012. He then headed out to CA once again to work with producer Leroy Miller in July. Release date of that EP is set for December, and his new single ‘I Wanna Know’ is currently out and airing across the US/UK on indie radio. Additionally, the single won the title of ‘Top Indie Song’ for summer 2012 on Indie 104 LA. An acoustic tour of southeast US is being planned for 2013 to promote David’s new music.