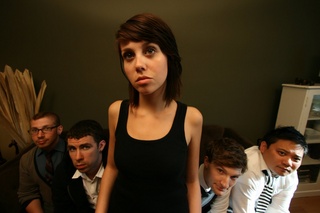 Enjoy Your Pumas is a female-fronted indie pop/rock quintet that blends powerful soaring vocals with atmospheric guitars and a punchy, energetic rhythm section. Their infectious, genre-defying music has fans of all styles jumping out of their seats. Their sound is akin to Emily Haines fronting Bloc Party covering Radiohead.

Top 10 Alternative Rock Albums of 2009 by CD Baby Music Discovery Podcast
Aside from having one of my favorite band names of the year, this group has the songs to back it up. Vocalist Rosie Blais is diverse as they come, with a huge voice.
Review by Jared Story
A+Ink: The EP is a re-release of Enjoy Your Pumas' 2007 debut and it's good - really good, actually. The five-piece indie rock band cleverly splits this release into two parts, 'Awake' and...
Puma Power! by Jared Story
Second time lucky? Local indie rock band Enjoy Your Pumas hopes so. The five-piece is re-releasing its 2007 debut recording, Ink the EP, Halloween night at the Park Theatre.Why we are re-releasing...
p
A
n
E
F
Song Title by Artist Name
987654d
LM
iAnEAqqqq