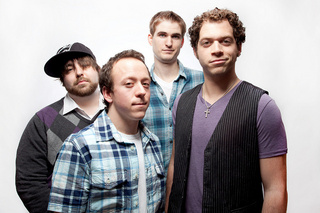 Hailing from the CT rock scene, Forget Paris was born to deliver unforgettable melodies right to your ears. Mixing various elements of Rock and Pop, they bring a sound unlike any to the table. Their newest full length album, “My Light My Armor” shows what these guys are truly capable of. Since its release, they have put forth two music videos for songs, “Jail has a Meal Plan” and “Sunrise”. Fresh off performances at Bamboozle (NJ) and B.O.M.B.fest (CT), they plan to record a new EP before a late summer tour. Forget Paris has opened for such acts as: Weezer, Snoop Dogg, Coheed and Cambria, The Used, the Academy Is…, Mae, Mayday Parade, Valencia, The Rocket Summer, Anberlin, and The Ataris. With songs of life, love, and following your dreams, Forget Paris provides the soundtrack to your disposition… Care to give a listen?

B.O.M.B. Fest explodes in Hartford: Day 1 by
Forget Paris, the homegrown boys from Derby, rocked the Budweiser stage late Saturday afternoon as they peformed a variety of songs off their first debut album "My Light, My Armor". "I'm still in...
p
A
n
E
F
Song Title by Artist Name
987654d
LM
iAnEAqqqq